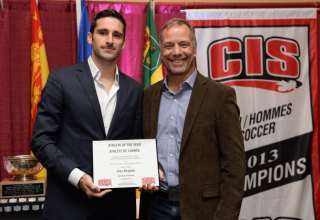 Alex Braletic made Ryerson University history on Wednesday night. When it comes to athletics, the school is more often than not a sad-sack story, with teams that regularly finish near the bottom of the standings. (As a Ryerson grad, I can write this without a hint or irony.)

But, Braletic became the first Ryerson athlete to ever be named the CIS player of the year in any sport. On Wednesday, he was named the top university soccer player in the country.

Braletic led Ryerson to an undefeated league mark, as the Rams went 12-0-2 in OUA play. Braletic played in 12 of those 14 matches, and scored 13 times. That led the province in scoring. But Braletic’s Rams lost the OUA final to their crosstown rivals from York, a team which featured former TFC Academy prospect Jonathan Lao, who was named the CIS rookie of the year.

And, on Thursday, in the first round of the national championships, Braletic and Ryerson suffered a 3-2 loss to Laval.  Braletic did get one of the goals for Ryerson, but Laval got a goal and an assist from Patrice Dion and a marker from former FC Edmonton fullback Fabrice Lassonde.

Meanwhile, York and Lao will face No. 1 ranked UBC in the final four. Both the T-Birds and Lions won their quarter-final matches. UBC got a tense 1-0 over the University of Montreal. Sean Einarsson, Canada West’s rookie of the year, got the 69th-minute winner.

And No.1-ranked UBC, a school known for its offensive displays, showed that it could close ranks on the opposition. Even though the Carabins had a Maxime Laurey attempt called back for offside, in the end they were only credited with one shot on goal.

Marie-Eve Jacques is only in her second year at the University of Sherbrooke, but she scored a whopping 21 goals in 14 RSEQ games. On Wednesday, she was named the CIS women’s player of the year. She was named the MVP of the RSEQ indoor soccer season in her freshman year, and was a member of many Quebec provincial youth teams.