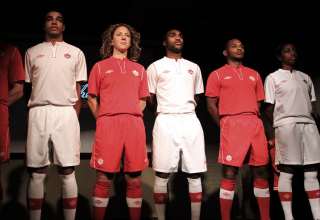 The Canadian Soccer Association held a special event at a swanky downtown Toronto restaurant, dressing up the occasion for the unveiling of its new Umbro kits and celebration of its centenary year.

But the expected “news” that was to be announced at the town hall proceedings beforehand simply confirmed what The 11 had already reported earlier in the week – Canada will play all three of its CONCACAF World Cup qualifying matches at BMO Field.

On Tuesday, it was learned that the Ontario Soccer Association had asked its league members to not play league games during Canada’s WCQ dates. It was also communicated that all the focus should be placed on the men’s national team and national team matches to be played at BMO Field. Adding the two together and it was apparent that the CSA was going to again hold the matches in Toronto.

Canada will host Honduras on June 12, Panama on Sept. 7 and Cuba on Oct. 12.
Many Canadian supporters lobbied for the CSA to play the games elsewhere because of the traditionally low attendance and being outnumbered by the opponent’s fans. For national team coach Stephen Hart, he understood the concerns, but based on all the factors it just didn’t make sense to play anywhere else.

“Well, we had a huge discussion about that as staff and with a number of the players as well and we felt when we looked at everything — all the travel, crossing of time zones, etc — it was important to look at travel issues and then how comfortable we were with the facility,” said Hart. “The knowing of the pitch, being familiar with the playing surface and all those things added up we felt it was best to play in Toronto. We knew there was a risk in terms of crowd support but we’re hoping the Canadian supporters come out and support us.”

Canadian midfielder Julian de Guzman does see light at the end of the tunnel and has seen an increase in the number of fans that support the national team in Toronto.

“Well, you can see that the support continues to increase,” said de Guzman. “Playing in Toronto in a multicultural city can be risky but I think that’s about to change this year. We’re celebrating an important moment for the Canadian national team and I think everyone is going to want to be involved with that and at the same time qualifying for the World Cup is a huge task for the men’s national team.

“I think they (CSA) felt a positive response by Canadian fans and coming out and supporting the early stages. And now that we made it to the next round, it’s a great way to promote and show that it’s going to get a lot more important and intense. And that will attract a lot more fans come our way and help us make it to the final round.”

When asked whether if his team had time to set up a proper camp and travel was no longer a factor, Hart was completely open to playing in another city.

“Oh definitely, but when you consider when games start coming around fast and furious there’s a lot of travel involved and you have to make it simple as possible for us and for the players. Right now it’s about the qualification. I do feel sorry for the fans in the rest of the country but we have to be realistic about qualifying for the next round.

“To play in Edmonton you’d have to play on turf and it’s the same thing in B.C. and to me that’s putting us at a disadvantage.”

CSA General Secretary Peter Montopoli isn’t overly concerned with having low fan support this year and is confident that the fans will turn out and cheer on the national team.

“No, I think we’ve built a good base in 2011 and I think the momentum of the Canadian Soccer Association, equally with the women’s program, centennial year I think we got some really good momentum in 2012.”

For Montopoli, the biggest concern was finding an appropriate place to play.

“The key is the surface that you play on and what are the grass surfaces in our country because the players want to play on grass. And I think when you’re playing in another country, principally, you want to be playing on grass.

So the expected announcement did not come as a surprise at all, but there was another bit of news that trumped the location of the qualifiers. Montopoli told the audience that Canada will host a friendly match against the US on June 3 at BMO Field. The match is part of celebrations being planned by the CSA and is a special Centennial match and will also serve as a final tune-up for both countries ahead of the WCQ.

It will be the first time the countries have faced each other in Canada since 1997 where the Americans won 3-0 in Burnaby, B.C. The win was in the final round of qualifying for 1998 World Cup and clinched its ticket to France.

Considering that both teams could potentially play each other again in the final round, the match will be an important test for both teams — not to mention a chance for Canada to get bragging rights and finally get revenge for its recent setbacks during the Gold Cup.

CSA and Umbro also unveiled its new kits which was a move away from the chevron design used last year. The centenary year will see the Canada play in more traditional solid red and white colours. Both the men’s and women’s national teams will have a chance to debut the new uniforms on back-to-back nights later this month in Cyprus. The women will play in the 2012 Cyprus Women’s Cup beginning play on Feb. 28 against Scotland and the men will play a friendly against Armenia the following day.