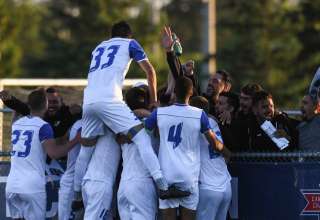 Until Wednesday night, if you’d heard of Diyaeddine Abzi, it was likely because of his reputation as a futsal player. He’s made one appearance for Canada’s national futsal side — against Costa Rica. In 2017, he was the top scorer at the Canadian Futsal Championship.

But, in Vaughan, Ont. on Wednesday, Abzi wrote a bit of history as an outdoor player. His late first-half goal gave the PLSQ’s AS Blainville a 1-0 win over League1 Ontario’s Oakville Blue Devils in the second leg of their Canadian Championship qualifying series.

This year marked the first time L1O and PLSQ are represented in the Canadian Championship. PLSQ gets the bragging rights for 2018. The prize? The winner gets to take on the USL’s Ottawa Fury.

Abzi’s winner came after a period of Oakville pressure. The ball was hoofed down the left wing by Blainville in order to simply get the ball out of danger.  Abzi found himself in plenty of space to simply barge down the wing. He got to the outside of Oakville’s penalty area, then, simply fired a shot at goal. Oakville keeper Matt George was in position to make the save, but somehow allowed the ball to squeeze underneath him.

With Toronto FC coming back from three goals down to salvage a 4-4 draw at home to D.C. United, the attention of most soccer fans in the GTA was with MLS, and not with the Canadian Championship. But, last week, we saw an energetic, smoke-spewing crowd energize the stands in Laval. Those fans are going to get a chance to party again — and likely twice, as Ottawa isn’t that far a drive from the PLSQ champions’ home base.