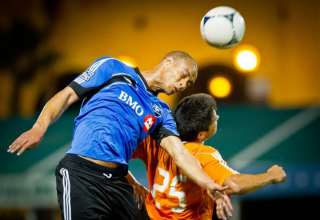 The Montreal Impact got a goal from hometown signing Patrice Bernier, but that was about the last positive result the team got out of its abbreviated stay at the preseason Walt Disney World Classic. The Impact drew the Houston Dynamo 1-1, in a game which saw Montreal’s Collen Warner get sent off in the 88th minute.

With the draw, the Impact knows it will not advance out of the group stage of the preseason tournament.

Bernier scored a great free-kick goal in the 56th minute, just six minutes after Dynamo second-year player Will Bruin had opened the scoring with a headed effort.

“At that distance, it’s about precision,” Bernier said in the post-game notes issued by the club. “My wife will be happy. She tells me all the time that I should shoot more. But all joking aside, I think we could have easily won this game. The result is good for our morale as we played well.”

Houston didn’t try to avoid any controversies. Striker Brian Ching played against his “old” club, getting about 70 minutes of work. Ching, the Dynamo’s all-time leading scorer, was picked by Montreal in the expansion draft. He was with the Impact in camp, but was traded back to Houston last week.

As well, the Impact used some depth players in a 2-1 win over the U.S. U-20 squad. The Americans loaned a player to Montreal to use in the match, as 10 Impact players were able to be in uniform for the game.

Evan Bush started the match, a sign that he will enter the season No. 3 in the depth chart, even though current No. 2 Greg Sutton, who played in the second half of the Dynamo match, could not supplant Bush as the team’s starting keeper when they were NASL teammates last season.

Eduardo Sebrango scored both goals for the Impact.