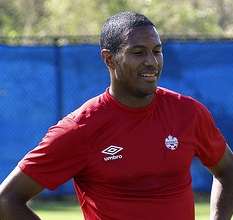 Coach Stephen Hart named a veteran-laden roster ahead of the Canadian men’s national-team’s Sept. 7 and 11 World Cup qualifiers against Panama.

Midfielder Josh Simpson, who suffered a badly broken leg in the final match of the 2011-2012 Swiss League regular season, is out. While he has got the cast off, he is still nowhere near ready to return to playing national-team soccer. Defender Mike Klukowski, who just moved to Cypriot side APOEL, hasn’t got enough training time and was left off the team. Youngster Samuel Piette isn’t on the team, as he hasn’t got playing time with his new team, Fortuna Dusseldorf. Also out is midfielder Issey Nakajima-Farran, who recently moved from Australia’s Brisbane Roar to Cypriot side AEK Larnaca.

But veterans have been called in to replace those players, most notably Patrice Bernier, who has been on absolute tear for the Montreal Impact. With nine goals and eight assists this season, he has asserted himself as not only one of the best players on the Impact, but one of the best midfielders in MLS. Also back in the fold is Toronto FC’s Terry Dunfield and FC Augsburg (Bundesliga, edited) defender Marcel De Jong.”He (Bernier) has played very well for the Impact,” said Hart. “He’s been arguably one of their key players, in terms of his work rate, his assists and scoring goals.”

As for De Jong, who has been plagued by injuries over the last couple of seasons, his reintroduction to the national team will be seen as a major boost. “What Marcel does is give us a different sort if dimension down the left,” said Hart.

And Dunfield’s play with Toronto FC — since the team decided to deal Julian de Guzman and hand him the everyday role as the holding midfielder — has really impressed Hart.

“He’s done very, very well for his club, and he did well in the second half of the Trinidad game.”

And while Hart says the lineup he picked in 100 per cent healthy, he will nervously watch a lot of club matches this weekend, hoping everyone makes it through intact.  The “dreaded weekend” is what Hart called it.