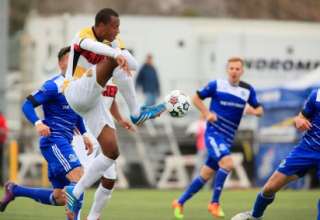 Chris Nurse, in white, was able to enjoy some revenge on his former FCE teammates. PHOTO: FC EDMONTON/TONY LEWIS

It was a battle of FC Edmonton’s rotated squad against a Fort Lauderdale Strikers team that didn’t get to the Alberta capital till 2 a.m. Saturday morning.

But despite playing in snow and freezing temperatures, the jet-lagged Strikers won 3-1 Saturday night at Clarke Stadium. FCE is now winless in four NASL matches this season, and is already 11 points back of spring-season table-topper, Minnesota United FC.

FCE’s dreadful night was punctuated by having to see teenage forward Sadi Jalali taken off a stretcher and sent to hospital, after a head-to-head clash with former Eddie Chris Nurse.

Nurse was yellow carded in the first half for a foul that sent Jalali crashing into the fence just outside the touch line. At the 93 minute mark, his forehead crashed into Jalali’s temple, sending the Edmonton teen crashing to the turf. After the game, Nurse sported a massive goose egg over his eye.

“There was no intent to hurt him,” said Nurse. “Sadi is one of my best friends. I talk to him all the time, even though we are on different teams, now.”

“That was probably his ninth foul of the game. We hope the kid is OK. What happened? I’m not surprised at all. We had him (Nurse) here last season. We decided to let him go for a reason.”

Nurse didn’t want to gloat after the game. He said he wanted to leave the past in the past.

“Edmonton is a very good defensive team.” said Nurse. “To come here and get three goals here is a big achievement. We want to show people that we have a very good team. We think a lot of people have underestimated us.”

One thing that can’t be debated was that this was FCE’s worst effort of the season. Coming off a 3-1 win Wednesday over Ottawa in the Amway Canadian Championship, and first leg of the ACC semi-final against Montreal slated for this Wednesday, Miller decided to rotate his squad. Forward Daryl Fordyce, who scored twice against the Fury, was dropped to the bench. So was teenager Hanson Boakai, who had a goal and two assists Wednesday. Striker Frank Jonke and defender Marko Aleksic were also left off the starting XI.

Mike Banner, recovered from a hamstring problem, got the start on the left side, while central defender Mallan Roberts returned to the lineup after an injury spell. Tomi Ameobi and Jalali got the starts in the advanced positions.

But, FCE had a massive weather advantage. Snow flurries began to fall just minutes after the kickoff, and the game was played in blustery winter conditions — in May — as Edmonton dealt with conditions at about the freezing mark, just about 16 C below the normal temps for early May.

The Strikers felt their way into the game, dealing with the conditions and the slick turf — and the Eddies got a couple of early chances. Veteran keeper Oka Nikolov beat back an effort from Jalali, then cradled a shot from distance taken by fullback Edson Edward.

But the Eddies spotted the Strikers the advantage before halftime. Mark Anderson shook off a challenge from FCE’s Ritchie Jones and slotted a defence-splitting pass to Martin Nunez. Keeper John Smits made a good save, but the rebound went to Striker Fafa Picault, who was left wide open in the area. He then slotted a ball back to Nunez, who was also open despite having the first chance. Nunez roofed the second chance.

“I’m not surprised that we’ve given up such a poor goal, considering our attitude in the back at times,” Miller said.

Nunez, like Nurse, has FCE baggage. He was with the Eddies in camp back in 2013, and was cut before the season.

Miller brought in Fordyce and Boakai for the second half, but the Strikers were able to increase the lead. Darnell King laid a clever header into the box, just out of reach of defender Albert Watson. Smits was slow to come for it off his line, and Picault beat the keeper to the ball, smashing a low drive off the post and in.

The Eddies were able to claw one back. Boakai laid in a cross that Ameobi headed to the middle of the area. Fordyce got to it and, with his back to goal, cheekily backheeled it into the goal.

It was just the Eddies’ second regular-season tally of 2014.

But, the Eddies’ challenge was undone by some diabolical play in their own end. A giveaway by Jones allowed the Strikers to get into the final third and, eventually, Watson was sent off for blocking an Anderson shot with his arm.

You can debate whether or not Watson deserved to be sent off, as he didn’t know much about the shot. But what can’t be debated is that Anderson’s shot should never have come in the first place. Seconds before the ball was fed to Anderson, Nunez was dangling along the end line, with his back to goal, surrounded by blue shirts. But, somehow, he was allowed to turn and get the ball to Anderson.

Anderson, in turn, buried the penalty.

“It’s as poor as we’ve defended for a long time,” admitted Miller.