June 20, 2021
9 New Articles
Home NASL & USL More NASL & USL Attakora and Beckie signings show that if they can count as domestics, Canadians can play in America 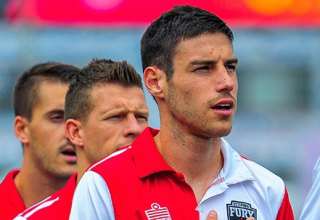 Nana Attakora and Drew Beckie prove a point: That if a Canadian player is able to count as a domestic player on the roster of an U.S.-based NASL team, he’ll get a shot.

Both Attakora, who has represented Canada at the senior-team level, and Beckie, who was part of the U-23 team that tried to qualify for the 2012 Olympic men’s soccer tournament, have the paperwork necessary to count as domestics on the rosters of U.S. teams.

In December, Beckie — a green-card holder who was born in Saskatchewan and grew up in Colorado, but clearly identifies himself as Canadian — was signed by the Carolina RailHawks.

Over the Christmas break, the Fort Lauderdale Strikers signed Attakora and three other players to deals. The Strikers confirmed that “all four players are U.S. citizens or green card holders, and will not count against the seven-man foreign player limit.”

So, in the cases of Attakora and Beckie, not being counted against the NASL’s foreign-player limit was a huge benefit; unfortunately, it’s not an advantage that many Canadian players have. I’ve been told by many others that, without the ability to count as a domestic, getting trials with American MLS or NASL clubs is very difficult, even if some of those clubs express initial interest. Face it; even if a Canadian would serve those clubs well, it’s hard for the marketing departments of those teams to pump up Canadian signings to fan bases hungry for South Americans or Europeans.

NASL has said that the roster inequality is a “federation issue” (to quote the words of Commissioner Bill Peterson) and MLS Commissioner Don Garber has said it’s a labour-law issue.

But, USL, a professional league that’s affiliated with MLS, counts Canadians as domestics league-wide. So, while MLS claims labour-law issues, the pro league that it uses to develop its players is quite capable of making Canadians domestics on the rosters of its U.S.-based teams. In fact, since MLS entered into a developmental agreement with USL, it’s only made its labour-law argument all the more questionable.

There are plenty of Canadians looking for work in North American pro soccer. Beckie and Attakora show that it’s easier for Canadians to get work if they’ve got their U.S. paperwork. It’s a pity that all Canadians don’t get that chance, considering we in Canada fall all over ourselves looking to give Americans chances to play here.