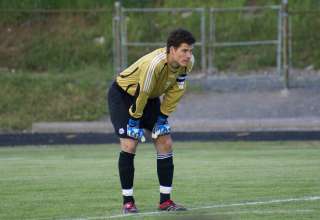 FC Edmonton announced a program sponsored by the Stoke City keeper called “Kicks for Kids,” where disadvantaged local youths will get tickets to NASL home games this season.

“I come from a bit of a tough background,” said Begovic in a release. “My family and I came to Canada with not a lot as part of a refugee family so my parents had to work really hard in order to give me anything I had. I do some work with kids here in England so when I was presented with this opportunity, I thought about it a little and it made a lot of sense because I think I can do some good over there as well.”

Hmm. Bosnia and Herzegovina is currently banned from FIFA and UEFA due to the structure of its football federation. Begovic was recently hammered in the Bosnian media for not playing in his national team’s recent fixtures. And, the national team has lodged an official complaint against him for skipping a recent friendly. Begovic claimed he did not want to anger Stoke City management and lose his spot in the pecking order with the EPL side. If not for two rather meaningless appearances for Bosnia and Herzegovina, Begovic could still switch back to Canada.

He came on for one minute of stoppage time play in a 2-0 win over Estonia in a World Cup qualifier — a move clearly made to get him into a senior A game, and played 44 minutes in a 1-1 Euro 2012 qualifying draw draw with Albania. But those qualifiers, those meaningless minutes, count as an appearances in an “A” internationals, and preclude him from making the move back — even with the relaxed eligibility rules FIFA introduced in 2009.

But it looks as if this effort to put money back into the Edmonton soccer community is way for Begovic to reach out to fans in Canada.

Right now, Begovic is a man without a country. He came to Canada to escape war, and left the national team. Now, fans in his homeland want his head.