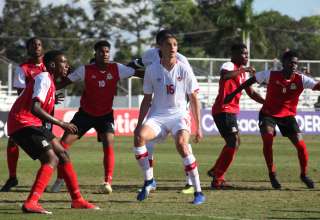 Canada’s trip to Florida for the CONCACAF U-20 Championship has turned into a nightmare. All that needs to happen is for the team bus to run out of gas on a lonely road, and then be “helped” by someone who brings the team back to a long-forgotten haunted house.

On Tuesday, the Canadian team’s chances to advance out of its six-team group were turned into very long odds thanks to a 2-1 loss to Panama. But, it only took till Thursday for Canada to turn “long shot” into “DOA.” Canada was on the losing end of another 2-1 score, this time to… OK, breathe, calm down, clear your mind…

That’s right. The U-20s aren’t going out with a whimper. They’re going out, supernova style.

Romario Martin opened the scoring for the Kittitians and the Tyreese Shade doubled the lead before halftime with a long, speculative, skipping free kick that beat Canadian keeper Thomas Hasal, who was very late to move on the ball.

Jordan Perruzza scored on a free-kick effort in the second half to pull Canada within one, but, despite having almost all of the ball down the stretch, the Canadians didn’t turn the possession into a shooting gallery. In the end, Canada finished the game with only six shots on target. Yes, St. Kitts had only three, but soccer is about taking advantage of your opportunities, not how many opportunities you get.

After Panama, we knew Canada was in deep. But Thursday’s match, for these young players, was more about showing their bounce-back-ability and, well, yeah.

Yes, some of Canada’s best U-20s are being saved for the senior team, who will play, you guessed it, St. Kitts and Nevis in the CONCACAF Nations League on Nov. 18. But, still, with the players on offer, players who have USL experience, who are in MLS academies, you’d expect to see more from the U-20 team that had a lot of the ball, but struggled to break down an organized Kittitian defence. When Canada got to the final third, the ball movement was too slow, too measured, to create enough openings.

When St. Kitts and Nevis goalie Zaykeese Smith bobbled crosses — and he did that on big occasions a couple of times, there weren’t Canadians waiting on the doorstep. And, in the final five minutes, when you’d expect a frantic push, the Canadians looked like they’d accepted their fate, as we saw a team allow its Caribbean opponents to clear its lines far too easily.

Instead of being another U-20 World Cup qualifying process where we can say “shucks, just outside the top group,” we can wonder, outside of a few shining stars playing for the senior team, just how many cracks in our program need to be fixed. Just as the senior team is giving us new hope, the U-20 team has provided us with a reality check.