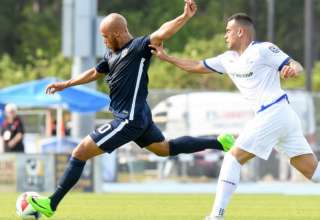 His 77th-minute goal gave the Jacksonville Armada a 1-0 victory Sunday at Hodges Stadium over the Eddies, as both teams opened their NASL campaigns.

Banks grabbed a loose Edmonton pass in midfield, then darted in and around a sea of FCE white jerseys, before finishing the chance with his left foot. FCE goalie Chris Konopka, making his NASL debut, got a hand to the shot, but not enough to keep it out.

But, the question: Should the Armada have had 11 players on the pitch? Go back to the 12th minutes, and referee Rubiel Vazquez made a major decision to make. Armada midfielder Jonathan Glenn was whistled for raking his studs on the midsection of FCE central defender Albert Watson. Glenn saw only yellow, and remained on the pitch.

“I wouldn’t call any of our players a cheat,” said FCE coach Colin Miller. “So if our player is down, there has to be a reason. I thought it was a red card, but I’d have to see it again. For me, at first glance, I thought that he (Glenn) was very lucky to stay on the pitch.”

Banks had the best first-half chance for the Armada, lashing a shot wide in the eighth minute.

The Eddies’ best chance came fairly early in the game, with left back Netan Sansara — making his NASL debut — launching a low cross into the Jacksonville penalty area aimed for striker Tomi Ameobi. That led to a collision between Armada defenders, Ameobi and keeper Caleb Patterson-Sewell, but the ball stayed out.

“Netan did very well getting forward in the first half,” said Miller. “Unfortunately, we didn’t play the ball as much to him in the second half. And we need that, we need both of our fullbacks going forward.”

At halftime, Miller said he told his team that “there was nothing between the sides” and that he felt that it would take a major error by the Eddies for Jacksonville to win the game. The misplay in midfield, though, is what ended up allowing Banks to begin his second-half goal-scoring run.

Glenn had a weak shot on goal in the 69th minute that was easily saved by Eddies goalie Chris Konopka, who made his NASL bow. The fact that Glenn’s half-chance (at best) even made the match report is an indication of how close-to-the-vest this game was played.

Canadian Drew Beckie started at fullback for the Armada, while Canadians Adam Straith, Ben Fisk and Nik Ledgerwood — who all played for Canada in last week’s draw in Scotland — all started for the Eddies.

For the Armada, a team that is now run by the league, searching for a new owner and is using a minimal 20-man roster to help cut costs, the win was a relief after an off-season of uncertainty.

“This is not the end, this is just the beginning,” Armada coach Mark Lowry told the Jacksonville broadcast crew at the end of the match.

Miller said he’s disappointed to lose, but this was simply the first of a 32-game schedule. He said that many of his players on the day weren’t at the their best in possession, and that’s something that needs to be rectified when the Armada visits the Eddies for next Saturday’s Clarke Field opener.

“No need to panic — we have 31 games to go, and we have the chance to set it right next week in our home opener.”