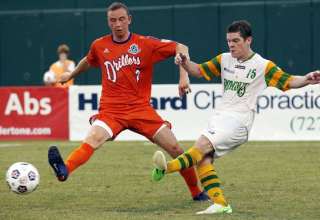 Daniel Antoniuk got a measure of revenge against FC Edmonton.

Antoniuk, who scored the first-ever winning goal in FC Edmonton’s NASL history but was released by the team at the end of the 2011 season, got the only tally as the Tampa Bay Rowdies edged the Eddies by a 1-0 score.

Antoniuk scored late in the first half, heading home a cross from Mike Ambersley, who made a great run down the right side of the pitch. Edmonton keeper John Smits said it was an unlucky goal to give up, as possession changed and Tampa broke up the field after an FCE pass struck the referee in the back.

“That’s how we lost possession, the ball hit the referee,” said Smits. “It was an odd transition. So, the way they scored that goal definitely left a bitter taste in our mouths.”

But what made the goal all the more painful is that it came just minutes after Rowdies defender Stuart Campbell absolutely robbed the Eddies’ Paul Hamilton of what looked to be a surefire goal. Shaun Saiko fired in a corner kick for FCE, and Rowdies keeper Jeff Attinella made a mistake, coming out to punch the ball. He directed the ball towards Hamilton, who spun and lashed a volley that was headed under the bar. But Campbell, leaping backwards, headed the ball out of danger, in a goal-saving move that was a blend of bravery and sheer athleticism.

While FCE could feel hard done by to be down 1-0 at half, the Rowdies dominated the second half, creating chance after chance. But Eddies keeper Smits put on yet another goalkeeping clinic — and Canadian soccer fans have to ask if the sky’s the limit on rookie ‘tender’s career. Smits came in from the University of Toronto and was expected to be the team’s No. 4 keeper on the depth chart. Now, between Smits and Lance Parker (who played for the reserves this week as he recovers from a groin injury) it’s a case of 1 and 1A. In a year that FC Edmonton made several high-profile signings, Smits has been the front office’s prize discovery.

Smits was bailed out twice early in the second half; the first came when Hamilton slid across the front of goal to block what looked to be an easy goal for Antoniuk — a bit of turnabout being fair play for the defender. Then, Rowdie Frankie Sanfilippo headed a long cross off the post.

But Smits didn’t want to talk about his shot stopping. In fact, he was very critical in assessing his performance. He felt he did better on kicks along the ground, but that his deliveries on half-volleys needed to be better.

“Yes, I had a good game in terms of shot-stopping, but I didn’t feel that I did some of the things that I need to do if I want to move on and improve my game, where I can take it to the next level,” he said. “Yes, I can be my own worst critic. But that’s how I moved up from playing amateur in Ontario, to playing in the CSL, to playing in the CIS Championships to moving up to the professional level. If I want to keep improving, I havve to be hard on myself.”

With Jonathan Joseph-Augustin serving a suspension for a straight red he received in last week’s 2-1 win over Atlanta, recent addition David Proctor, who made his NASL debut as a sub last week, got his first start in the centre of the Eddies’ back line.

The loss ensures the Eddies remain eight points back of Carolina for the final playoff spot in the NASL, with just 10 matches left on the schedule. But the one hope for Edmonton is that, with this road trip coming to a close, seven of the final 10 will be at home. But, we have to remember that the Eddies have just two home wins so far this disappointing season.