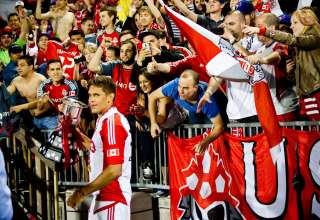 Just call them the Winless Wonders.

Toronto FC captured its fourth consecutive Voyageurs Cup on Wednesday, winning the Amway Canadian Championship with a 1-0 win (2-1 on aggregate) over the Vancouver Whitecaps at BMO Field.

The fact that Canada’s best club team hasn’t won a game (0-9-0) in MLS competition this year sounds like a punchline about Canadian soccer, yet once again this tournament, TFC played like a team worthy of silverware.  The Reds are 8-0-4 in their last 12 Canadian Championship games and now advance directly into the CONCACAF Champions League, having to no longer compete in a qualifying game to reach group play.

“We can still make something out of the season because we play Champions League now,” said forward Danny Koevermans. “The club needed this. The fans needed this.  Everybody needed this.”

Reggie Lambe’s strike in the 83rd minute won things for Toronto, and yet the key play in the match was a fracas between the two teams in the 57th minute.  After several seconds of pushing and shoving, both sides were reduced to 10 men — Julian de Guzman was given a straight red card for his backhanded swipe to Jun Marques Davidson, while Sebastien Le Toux was ejected after receiving his second caution of the game.

Tensions ran high for the entire game between the two Canadian rivals and there was plenty of chippy play to show for it.  A total of eight bookings were handed out by referee Silviu Petrescu, a Toronto native whose assignment drew some criticism from Whitecaps coach Martin Rennie.

“With a final between Toronto and Vancouver, surely there is enough officials within Canada that is not from Toronto,” Rennie said.  “I am very surprised that the CSA would appoint a referee from Toronto and I think that puts [Petrescu] under extreme pressure.”

The officiating, however, wasn’t the reason that the Whitecaps were Canadian Championship runners-up for the fourth consecutive year.  Vancouver had has reason to complain in past seasons — the Impact more or less rolling over in a 6-1 loss to Toronto in 2009, or last year’s weather-canceled game at BMO Field that the Caps were leading — but this time they lost simply due to a near-total lack of offence over both legs of the final.  Eric Hassli’s stoppage-time equalizer salvaged a poor offensive showing from the Whitecaps in the first leg and Vancouver was equally flat on attack on Wednesday.  The club managed just four totals shots in the game, none on goal.

It was an especially disappointing result given that the Whitecaps came loaded for bear with Hassli, Camilo and Le Toux all in the Starting XI and seemingly prepared to push the action.  It was a necessary strategy given that Vancouver needed at least one goal to overcome TFC’s away-goal tiebreaker from the first leg.

While TFC had a mind to defending, it stayed on the attack as well, and controlled the majority of the play during what quickly became a very chippy first half.  Time after time play was halted for fouls and bookings, with Torsten Frings (back after sitting out TFC’s previous two games with a shoulder injury), Martin Bonjour and Le Toux all being shown yellow cards in the first 45 minutes.

Once the game became 10-on-10, the extra space benefitted the Reds, who were able to find space to move the ball amidst the Vancouver defenders.

“I think with the two sending-offs the game got a bit spread out,” Lambe said.  “I think the crosses into the box from us are very important and I just think our finishes need to be better.”

It was one of those crosses that set up the winning goal.  A cross to the right side was bumped out to Lambe just inside the box.  The Bermuda international dribbled a few feet closer to create room and he fired the ball past goalkeeper Joe Cannon.  It was Lambe’s second goal of the ACC and fourth overall with Toronto.

The Whitecaps finally came to life in the final minutes as they pressed for the tying goal. Martin Bonjour had a free kick attempt from outside the box that went just a foot over the bar while, in stoppage time, TFC goalkeeper Milos Kocic came well out of the net to knock away a corner attempt and ended up out of position, but no Caps player was there and the ball rolled harmlessly down the line.

“We are obviously disappointed on how the game went,” Rennie said.  “It is always hard to lose a Cup final, especially if you don’t feel you necessarily played at the level you would hope and like.  A number of key incidents didn’t go our way tonight.  The finals are often close games and if you get a chance here or there, you have to take them.”

With its 0-9 MLS record hanging over the proceedings, winning another Voyageurs Cup ensures at least a bit of glory for Toronto this season, and possibly will end the speculation about Aron Winter’s future as the club’s head coach.  TFC hosts Philadelphia on Saturday and then doesn’t play again until June 16 due to the almost league-wide break for international dates.

Had the Reds lost the ACC and then to the Union, it wouldn’t have been unexpected had Winter been fired in order to give a new coach lots of time to train and prepare with his new team. Instead, Winter got to enjoy the spoils of his second Voyageurs Cup with Toronto, calling the win “a moment for relief.”

The coach hoped that the result would lead to better things in Major League Soccer. “I think it could make a difference because…at a certain moment it is important to play good, to win games,” Winter said.  “I think the confidence is going to continue to grow more for the players because we have demonstrated that we can play together, win games and play good football.”

With the national title in their grasp, TFC’s players joined their coach in already looking ahead to Saturday’s match, eager to end the losing streak and avoid sitting through a three-week break with an 0-10 record.

“We just needed a win just to get our confidence back up. We need to go into Saturday playing the same as we did today and we should get a win Saturday as well,” Lambe said.

The Whitecaps, meanwhile, will play their fourth big game in an 11-day span on Saturday when they head to JELD-WEN Field to their Cascadia Cup rivals from Portland.