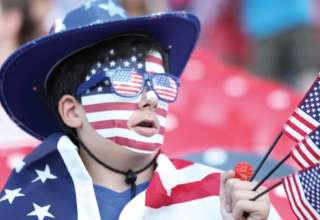 We begin our look back at the 2015 Women’s World Cup with a salute to the champions — this tournament was held on Canadian soil but, by the time the final kicked off, the Americans had made it theirs — on the field and in the stands…

Bravo, neighbours. Your fans showed up at Canadian stadiums in droves. For all but one match at the Women’s World Cup, you transformed our cities into your cities.

And your team — criticized before the tournament for being ill-suited to play on the quick artificial turf against the technically superior sides from Europe (and Japan) — proved all the critics wrong. Carli Llloyd’s first-half hat trick in the final, in a 5-2 decimation of Japan at BC Place, cemented her as the best female player in the world.

No, the Americans may not be as pretty to watch as the French. They may not have the tactical acumen of the Japanese. But, with the likes of Julie Johnston manning the centre of the defence, Morgan Brian winning the ball and Megan Rapinoe providing killer wing play and inch-perfect set-piece kicks, the Americans made up for their shortfalls with a team made of up of, well, individual geniuses.

They didn’t always look like they were on the same page; remember the stuttering 0-0 draw with Sweden at the group stage? But, as the tournament went on, the Americans got better. The French, Germans and Japanese had already peaked. And, after the Americans beat the Germans in the semis there was no shaking the feeling that this team had become an unstoppable force.

“It’s going to come,” Lloyd predicted when the American team was being criticized for being too direct, too one-dimensional and too defensive in the early stages in the tournament. “And we keep telling everyone we haven’t peaked yet. We still have a few games to go for that.”

And their supporters need to take credit. In only one game — the round of 16 win over Colombia in Edmonton — did the Americans not fill the stadium. With that game on a Monday night,and the next game in Ottawa, the American fans had taken a win over Colombia for granted and had already begun heading to the capital for the quarters.

For the remainder of the games, you wouldn’t have known you were in Canada. There were stars. There were striped. Eagles. Uncle Sam hats. Chants of U-S-A.

“It’s been amazing, though, to walk into a stadium not in our home country and have 35 and 54 or 52 [thousand] respectively,” said Rapinoe. “And watching the other games, too, not all the games are getting that kind of support, but definitely Canada’s being supported like that and it seems like the games have been well attended so far. But for us to have so many fans is just amazing. And it’s not like it’s 52,000 people, it’s 52,000 Americans.”

By the end of the tournament, the two American players Canadians love to hate — Abby Wambach, the loudest opponent of playing a Women’s World Cup on artificial turf, and Vancouver-born badge-kissing team-switcher Sydney Leroux — had been reduced to peripheral figures. This tournament was about that staunch American defence and Lloyd and Rapinoe. And it’s hard to be resentful when the Americans were so dominant in the semifinal and the final.

“From the early group games, this is just ultra-competitve, the most competitive World Cup to date, I think, in terms of the quality of teams in it,” coach Jill Ellis said after the 2-0 triumph over Colombia that sent the Americans to the quarters. “So, certainly nothing is taken for granted in any of the games we’ve played thus far.”

They were just getting started.

The secret to the Americans’ success? First, their will to win. When it comes to gut-checks, reaching back and finding that little bit extra, no one does it like the Americans. Sometimes, it feels as if European and Asian soccer nations are too obsessed with tactics, and discount the need to motivate players to have the games of their lives. Give me a team that wants to win over a perfect Total Football model anytime. Soccer is not won on the chalkboard. It is a living, breathing game played not by Xs and Os, but people. It has emotion. It has drama.

Second, is the fact that the Americans get better by competing against each other. The reason the American backline emerged as the best in tournament, is that in training they have to face off against American forwards.

“They go up against each other every day, and that’s a heck of a task, when they’re defending Alex [Morgan] and Abby and Rapinoe and those guys,” said Ellis. “So, they get a lot of testing, so I’ve just been really pleased with the amount of maturity they’ve had. I think they’ve done a fantastic job of reading the game and staying composed and, even on the ball, you’re talking about their defending, but even on the ball they’ve done some very, very good things I’ve been pleased with.”

The Women’s World Cup began with a sellout at Edmonton’s Commonwealth Stadium, as Canada got a last-second penalty that allowed it to eke out a win over the Chinese. This massive, nationwide sporting event began with a great display of Canadian pride; but, as the games went on — and with Canada getting knocked out of the tournament at the quarter-final stage — this became America’s tournament.

By the end, it was Vancouver, USA, that watched the Americans rip the Japanese to shreds. Canada had the right to host the tournament; but, by the end, this was America’s Cup.

For Canadians, there was no point in being bitter; no point in looking back to the 2012 Olympic semifinal, which the Americans won 4-3 in extra time. In 2012, Wambach lobbied referee Christina Pedersen to monitor how long Canadian keeper Erin McLeod, held the ball. It began a cycle of controversial calls that led to the Americans tying that game late, and getting the chance to win it in extra time. Now, in 2015,Wambach got the World Cup title that had eluded her.

But, there was no controversy about this.

Unlike 2012, America was clearly the best team. There have been World Cups before — both men and women — where we can say that the best team didn’t win. It wasn’t the case in 2015. Best traveling fans. Best team.

You deserve that trophy, America.