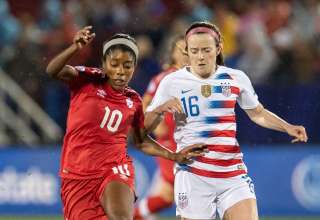 Ashley Lawrence in action against the USA. PHOTO: MEXSPORT/CANADA SOCCER

It’s like an alarm clock. Just when you start to feel really good about the Canadian women’s team, the team faces the United States… and loses. And, once again, you question how good our national side really is compared to other elite programs around the globe.

The United States is our reality check.  The Canadian women’s team  hasn’t beaten the Americans since March, 2001. Think back to what you were doing in 2001. Maybe listening to Destiny’s Child or maybe the Strokes’ Is This It.

So, in Wednesday’s final of the CONCACAF Women’s Championship, with the United States playing at home, it wasn’t a surprise that Canada fell once again. A 2-0 result, this time around. It, just felt so, well, unsurprising.

And, even though the CONCACAF final had no bearing on World Cup qualification, with both teams having punched their tickets to France with their semifinal wins, there is something about once again losing to the United States that, well, makes us feel like same old, same old. It makes us doubt again. It turns believers into fence-sitters.

After the game, Canadian fullback Ashley Lawrence said that “To win this tournament would have been excellent, but we’ve learned so much.”

Eventually, this team has to learn to be competitive with its regional rival.

This was a game in which Canada got exactly two shots on goal. But one, a header from Kadeisha Buchanan off a corner kick from Janine Beckie, was generously scored as a shot on targets by the CONCACAF gatekeepers. It looked like the ball was headed wide of the net when American keeper Alyssa Naeher got a hand to it.

So, really, one shot on target.

Sure, the second American goal, a late insurance marker from Alex Morgan, was offside — everyone saw it save for the linesman.

But, the first, coming from Rose Lavelle inside the two-minute mark, was a gift from Canadian central defender Shelina Zadorsky. The Canadian’s clearing attempt went right to the top of the penalty area for the American midfielder to attack. In the end, Zadorsky ended up providing a well-cushioned ball for Lavelle to run on to and shoot.

It can be easy for an apologist to say that one terrible error led to the Americans’ first goal, and that the second was offside. But, Canada had three attempts on goal — on target and off — all game long. Three. And, when Canada was chasing the game, when it needed a goal, there were zero shots on goal in the second half.

Yes, Canada is going to France. We expected it, yet it should still be celebrated. But, with yet another loss to the Americans in which the Canadians didn’t generate enough to be competitive, it’s OK to be nervous about what Canada will do when it gets to the World Cup.