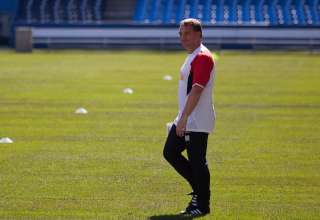 Toronto FC recorded a 1-1 draw with (at least a version of) Liverpool FC in a friendly that was short on big-name Premier League stars but still provided some quality soccer for the 33,087 in attendance at the Rogers Centre.

Both teams made liberal use of their benches, fielding entirely different Starting XIs after halftime and making still more subs throughout the second half.  By the end, it was less TFC vs. LFC as it was the Toronto FC Academy against the type of squad you would see Liverpool field in the final moments of a League Cup tie against a fourth-tier club.

That said, even ‘Pool’s lesser lights make up a talented side, so Toronto head coach Paul Mariner was pleased that his younger charges held their own in the second half.

“It lets all the players, especially the Academy players, realize they’re not that far away from competing with some very very good players,” Mariner said.  “It’s a wonderful educational experience for everybody concerned, just to see the technical ability of the Liverpool players and how they spread the ball around.  It was beautiful.”

The friendly was TFC’s 11th game in 36 days, and thus it was no surprise that Mariner limited most of his regulars to just 45 minutes.  Ashtone Morgan only played 28 minutes and would’ve been held out entirely had it not been his father’s birthday, as Mariner explained, and goalkeeper Milos Kocic got a day off in place of trialist Freddy Hall and backup Quillan Roberts. Kocic has played every minute for TFC this season, and though Mariner is a fan of the 17-year-old Roberts, the club is exploring signing Bermuda international Hall to provide some more experience on the bench.

“For safety reasons, it’s best that we sign Freddy and we’re in the process of trying to do that,” Mariner said.

Liverpool was short eight major players who were held out due to FIFA-mandated time off in the wake of international tournaments.  This meant that some of the stars of Euro 2012 (the likes of Pepe Reina, Steven Gerrard, Andy Carroll, Fabio Borini) and others were ineligible for Saturday’s exhibition, a fact that wasn’t confirmed until the day before the match, disappointing both fans and opposing players alike.

“It would’ve been [fun] to say in the pub tonight I played against Steven Gerrard, that would’ve been brilliant,” admitted TFC midfielder Terry Dunfield.

The thin ‘Pool roster didn’t appear to dampen the spirits of the Rogers Centre fans, especially the boisterous Liverpool supporters excited by the rare chance to see their club in person.  “We’ll Never Walk Alone” was even played before the game in a nod to Anfield tradition, drawing a near stadium-wide sing-along.

“Our objective was to improve our physical and football fitness.  With the heat and condition of Toronto as they’re a good part into their season, for us it was a good test,” said Liverpool head coach Brendan Rodgers.

Liverpool was nearly caught in the seventh minute as Luis Silva and Ryan Johnson nearly combined on a tremendous scoring chance.  Silva provided yet another example his passing acumen, heading a cross to an open Johnson in front of net, and the shot just glanced off the hand of goalkeeper Brad Jones. The player who actually provided the most minutes for TFC was 18-year-old Academy product Tyler Pasher, who came on for Morgan in the first half and remained for the rest of the game, even serving as team captain in the second half.  The Elmira, Ont. native played for Canada in the U-17 World Cup last year and his performance on Saturday drew praise from Mariner.

“I thought he was terrific playing against Joe Cole and other lads,” Mariner said.  “He’s a young boy but he’s tremendously talented.  That’s why I gave him the armband in the second half, he deserved it.”

Newly-acquired striker Quincy Amarikwa put Toronto ahead in the 59th minute.  Sergio Camargo, another Academy charge, made an initial shot that was stopped with a hand-save from keeper Peter Gulacsi, but the rebound was there for Amarikwa to convert his first score in a TFC shirt.

Amarikwa was picked up from the New York Red Bulls (in exchange for a conditional draft pick) in a trade that was announced only on Saturday, so it was a quick debut for the 24-year-old forward.  He left the game in the 82nd minute after taking a knock, though Mariner said that Amarikwa was fine and that the substitution was just precautionary.

Liverpool got the equalizer in the 69th minute thanks to two of their own young stars.  Seventeen-year-old Raheem Sterling did most of the work in fighting to keep the ball on the left side and getting a shot past Roberts, but though it looked like the ball might sneak over the line anyways, 18-year-old Adam Morgan made sure by touching it in for the goal.

Liverpool move on to continue their World Football Challenge exhibition tour with games against AS Roma in Boston and Tottenham Hotspur in Baltimore, while Toronto gets a much-needed week off before returning to league play on Saturday against Houston Dynamo at BMO Field.  TFC will look to continue its three-game winning streak, and its impressive 4-2-4 record since Mariner took over on the bench.

“There’s no hiding from the fact that our schedule’s been brutal as of late.  We have a week now until our next game and hopefully we can keep this run going,” Dunfield said.