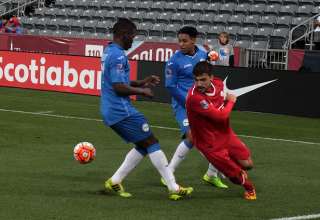 But, who wouldn’t be?

“If you’re not nervous, I don’t think that’s normal,” said Piette Thursday in a conference call with Canadian journalists.

“For sure, we’re nervous. We’re one match away from qualifying for the Olympics.”

The teams will meet Saturday in Sandy, Utah. The winner, of course, goes to the final; but, more importantly, gets a berth in the Rio Olympic soccer tourney. For the loser, all is not lost; the teams that drop the two semifinals will play in the third-place game. The third-place finisher will face Colombia in a playoff for a spot at the Olympics.

Of course, Mexico is a powerhouse. But there are other factors at play, too. The game will be held in Sandy, Utah — which means the players have to deal with the challenges that a game at altitude presents. Canada played its first two group-stage matches in Kansas City, a loss to the United States and a win over Panama. Then, the Canadians travelled to the Denver area for its final group-stage game, and struggled to a 2-2 draw with Cuba at altitude.

Piette said that even though the first two opponents were more physical in nature, the Canadian players had trouble catching their breath against Cuba. The Rocky Mountain height was indeed a factor.

“It was tough to breathe on the pitch,” he admitted.

And, Utah will over no respite for the Canadians, whose players rarely have to cope with thin air.

Sure, there are questions to be asked; is there a way for our team to better prepare for games held well above sea level? Mind you, there are differing opinions on how to deal with games at altitude. Some teams will tell you to get in right before the game; that one or two days in the environment ahead of the game does more harm than good. Another school of thought is you try to train as much as possible in those conditions.

The schedule is also a factor. The organizers pack this tournament into as tight a window as possible. Canada played its first game in Kansas City, had one day off, then played again. Then, there was a travel day to Denver, one off day, and another game day (Tuesday). Canada will play again Saturday in Utah, so that’s four games in less than two weeks. Even without the travel, that schedule is awful.

“It’s pretty tough, to be honest,” said Piette. “These have been intense games; physical and tough on our bodies. You have to give 100 per cent in every game.”