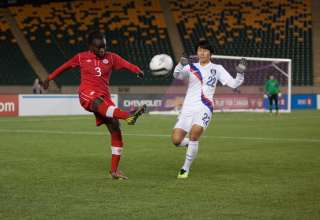 A friendly match on a cool Edmonton autumn night resulted in a 3-0 victory for the Canadian women’s soccer team over South Korea. The conditions were about as good as you could ask for during this season at Commonwealth Stadium.

Despite a home-field advantage, it wasn’t Canada but rather South Korea whom developed the majority of the scoring chances in the first half. However, a great save made in the eighth minute by Canadian goalkeeper Erin McLeod set the tone for what was to come for the rest of the half. McLeod admitted that her teammates might not have been “game fit,” considering that this is the first time they’ve played together in a while. However, she showed no signs of rust. McLeod put on a clinic; making key saves to keep the pressing South Koreans off of the scoreboard.

“I don’t think [McLeod] ever has [any rust],” forward Christine Sinclair said. Even head coach John Herdman was very impressed with his goalkeeper. “[McLeod] is arguably the best [female goalkeeper] in the world,” Herdman said.

Even though they were trailing by one, the South Koreans kept pressing. However, McLeod was, once again, ready to answer the call. She made two huge saves in the 32nd and 36th minutes, and was once again rewarded.

Shortly thereafter, midfielder Brittany Timko-Baxter scored from inside the South Korean crease, making it 2-0 Canada heading into the second half.

Despite McLeod’s great performance in the first half, she made way for another local goalkeeper, Stephanie Labbe. The second half was more of the same for the South Koreans, as they ended up having the majority of the scoring chances. However, the South Koreans had hardly any success getting shots through to the keeper.

A scary moment for Canada came in the 55th minute, as Sinclair had a head-on-head collision with a South Korean player, and was down for several minutes. However, much to her team’s and Canada’s relief, she would stay in the game.

The South Koreans continued to press all game, but struggled to get any shots through to the Canadian goalkeeper. Suddenly, it was Canada’s turn to attack, and they converted once again.

A key interception and a brilliant passing play by the Canadian team resulted in a goal by forward Adriana Leon, giving Canada a 3-0 lead. Unlike Sinclair’s injury, South Korean defender Seo Yeon Shim’s injury forced her out of the game.

In the 77th minute, she fell awkwardly on her shoulder, and was helped off of the field. The closest South Korea would come in the second half to scoring was in the 82nd minute, but its attempt sailed wide. A few minutes later, with the Koreans still pressing, a key blocked shot by defender Lauren Sesselmann sealed the deal for the Canadians.

Though the entire game was quite physical, the final 10 minutes were especially so, and Herdman felt that it was necessary to defeat the Koreans.

“When you play against the Asian teams, we know that their short, tight play is their strength,” Herdman said. “They got beat up a bit tonight, and that’s exactly the game plan against an Asian team.”

The game was, more or less, a tune-up for the 2015 World Cup to be held in Canada. South Korea felt that though the conditions were a little different than what they were used to, it was no excuse for losing.

“The temperature [is] part of the game,” head coach Duk Yeo Yoon said, via translator.

Team Canada’s next game takes place in Vancouver at BC Place on Nov. 24. Mexico will provide the opposition.