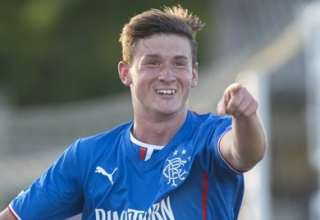 The Canadian Soccer Association released the names of the U-20 players who have are currently in Sunrise, Fla. for a week-long camp.

And one name jumps right out at the Canadian soccer supporter. Fraser Aird.

Aird has been the subject of will-he-or-won’t-he talk regarding his international future. Would he play for Canada or would he play for Scotland? And his appearance at Canada’s U-20 camp is helping confirm recent speculation that he’s ready to don Canada’s colours at both the junior and senior levels.

The teen, who is with Rangers, was placed on Canada’s 35-player long list ahead of last year’s Gold Cup. Then-Canada coach Colin Miller had tried to use his longstanding connections with Rangers to try and convince the teen to come play for his birth nation. Miller spoke with Rangers’ manager Ally McCoist last year to try and sell the parties in Scotland on the benefit of having Aird play for Canada. (CLICK HERE)

As a former Rangers player who represented Canada, Miller was hoping the connections would go a long way. But Aird didn’t play for Canada at the Gold Cup, so many of us pessimistic Canadians had pretty well assumed that the teen had committed to Scotland. After all, Aird had previously played for Scotland’s U-17 and U-19 sides.

“I am delighted that we were able to get the majority of the players we wanted into this camp and with qualifying a very short distance away it is important for the group to come together and start building the rapport and playing relationships that are going to be vital to us going forward,” said Gale in a release. “It is great that these young lads are getting valuable first team experience and our overseas lads like Fraser, Michael (Petrasso) and Dylan (Carreiro) are able to bring their experiences to the group.”

Gale said he got the majority of the players he wanted. But, with so many of the teams in the Voyageurs Cup utilizing their younger players, Gale’s roster needs to be taken with some grains of salt. Players such as Whitecaps’ keeper Marco Carducci and FC Edmonton teenager Hanson Boakai, who has so far been the story of the tournament, have club commitments at the moment, and you have to believe will be in Gale’s plans.

Yes, Boakai is just 17, but if he’s already putting in dominating performances against men in the Voyageurs’ Cup, there’s no reason he isn’t ready for the U-20 level.

Canada will play in the U-20 CONCACAF championships next year, which is a qualifier for the 2015 U-20 World Cup in New Zealand.