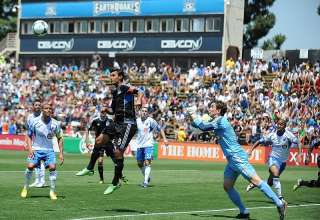 The game could have resulted in either team claiming victory. That neither did was more due to the visiting Impact than to the host Earthquakes. The four key saves Impact goalkeeper Troy Perkins made in the opening half served as the main reason his side went into the interval up by a goal. San Jose directed eight shots at the Montreal goal in the opening 45 minutes of play with several near misses coming in the opening quarter hour.

Six minutes in, Earthquakes forward Chris Wondolowski got the ball to a stealthy Rafael Baca, who unleashed a point-blank shot that Perkins pushed away. Wondolowski, wearing the captain’s armband this afternoon, curled an 11th-minute corner kick towards the Montreal goal. The shot appeared to catch Perkins flat-footed but he managed to get a hand on it and redirect it harmlessly over the crossbar.

In the 14th, Adam Jahn rattled one off the horizontal bar with the rebound arriving at Wondolowski’s feet. Once again Perkins, this time with a diving save, denied last season’s top MLS marksman.

Montreal had one viable opportunity in the opening half and it made the most of it. Justin Mapp, the hero of Wednesday night’s six-nil drubbing of Toronto FC in the semi-finals of the Canadian Championship, got the ball from Felipe and, with nobody wearing black challenging him, advanced the ball and shot from 35 metres out. Evading surprised ‘Quakes ‘keeper, Jon Busch, the ball clipped the right post on the way into the back of the net.

San Jose had one more challenge in the opening half, made possible by a Matteo Ferrari miscue. The Italian defender, returning to the Impact lineup after rehabbing an injury and wearing the captain’s armband in the absence of injured Davy Arnaud, attempted to redirect an incoming aerial towards Perkins with his chest. He failed, the ball accruing to opposing midfielder Baca. The Mexican’s shot was pushed aside by Perkins.

Mapp, who went from scapegoat to superstar in the eyes of many Impact fans over the past couple weeks on the strength of his performances against Chicago and Toronto, got his second of the match in the 47th minute. The play originated with Andrew Wenger, who took advantage of the fact that, while defender Victor Bernardez may be a fearsome presence in front of the Impact goal on set pieces, he is neither quick nor nimble when it comes to play in his own end. The Montreal forward relieved a prone Bernardez of the ball on the edge of the area and slid the ball along the goal line where Mapp, who re-signed with the Impact for 2013 at a significant discount, slid to meet the ball and put it into the mesh behind Busch.

Forward Jahn, acquired by the Earthquakes in the fourth round of this year’s Supplemental Draft, pulled his side within one in the 59th minute. The marker was the end result of a pair of nifty lateral passes from Wondolowski to Sam Cronin to Jahn that climaxed with the Sacramento-area native rolling the ball into the bottom left corner of the goal.

Wenger had his chance to put the game out of reach in the 71st minute. Dribbling up the right side with an offside Sanna Nyassi, who had replaced Marco Di Vaio in the 65th minute, for company, the Impact’s first choice in the 2012 SuperDraft was statutorily prevented from connecting with the Gambian forward and had his shot smothered by Busch.

Coach Marco Schallibaum brought Patrice Bernier on for Wenger a minute later in an attempt to shore up his side’s defence as the clock ticked down. The move proved to be ineffective as the Earthquakes, as they did on a regular basis last season, came through in the late going but not before giving the Impact one last kick at the can.

Felipe dribbled up the left flank and crossed the ball towards the goalkeeper’s box but a visibly slowed-down Mapp was unable to time his slide to intersect its trajectory.

San Jose got its tying goal a minute into extra time. Midfielder Walter Martinez, one of three Hondurans to appear on the pitch for the Earthquakes, lobbed one in that found Wondolowski, unmarked by defender Dennis Iapichino, in front of the Montreal goal. A short header later the ball was at the feet of Cronin. His bouncing shot from the top of the box eluded Perkins, entered the bottom left side of the goal and provided the type of finish that San Jose fans have become accustomed to in the recent past.

The home side continued to press through the remainder for the five minutes of added time and might have got three points if not for Ferrari, who cleared balls with both his boots and his head as the crowd stood and cheered their team to come up with a third goal.