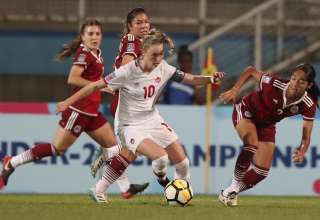 Canada has to play Haiti for third place in the CONCACAF U-20 Women’s Championship — and, more importantly, the region’s final spot in the U-20 Women’s World Cup.

The Canadians lost their semifinal match with Mexico in a penalty shootout, after Friday’s game in Trinidad and Tobago finished in a 1-1 tie after 90 minutes plus stoppage time. In youth tournaments, extra time is not played.

The result was cruel on Canadian keeper Rylee Foster, who made up for an early error with a couple of heroic saves late in the game, deflecting Venicia Juarez’s point-blank shot off the bar and then diving to stop an 89th-minute penalty from Belen Cruz.

Canada went three for three to begin the penalty shootout. But, Julia Grosso and Jordyn Huitema both had their tame efforts saved by Mexican keeper Emily Alvarado, and Mexico ended up taking the shootout 4-3.

Mexico will play the United States in the final — and both have qualified for the World Cup. The Americans beat Haiti in penalties earlier in the day.

Canada beat Haiti in the group stage, but, having already qualified for the semis, the Haitians played that game with their B team. So, there really is absolutely nothing we can take from the game and apply it to the 3rd-place match. The only thing we do know for sure is that Haitian defender Emeline Charles will miss the game because she was sent off in the semi.

Now, back to the Canada-Mexico match: Mexico took the lead when Jimena Lopez’s not-so-dangerous-looking free kick was poorly played by the keeper and ended up in the back of the net.

Foster got a late break to a ball that wasn’t hit very close to the corner of goal, and didn’t have a lot of power. Still, she was still able to get her hands to the ball, but couldn’t get enough on it to send it wide.

For the Mexicans, and any player out there, Lopez’s free kick proved a valuable lesson; just get the ball on goal, and anything can happen.

In the second half, play was stopped for several minutes when Canadian defender Hannah Taylor and Mexican forward Lizbeth Ovalle collided. The players clashed heads and Ovalle was bleeding profusely from above the eye. Both players were wisely subbed off; after all, these are kids who are out there, and there is no excuse to keep them on when head injuries are involved.

Mexico took advantage of Taylor’s absence, as Cruz strolled right through the middle of the Canadian defence and had only Foster to beat. Foster beat away the shot.

Canada equalized in the 79th minute after a lofted ball into the area caused panic in the Mexican defence. Gabrielle Carle was able to find the ball and smash it into the roof of the net.

Foster then made a series of fantastic saves to preserve the tie, only for Canada to finally succumb in the shootout.