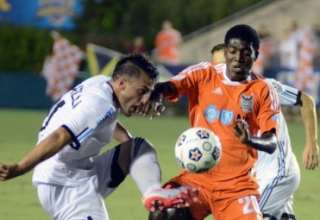 It might just have been the most one-sided one-goal game in the history of the modern NASL.

After a two-hour lightning and rain delay, the host Carolina RailHawks kicked off the fall season with a 1-0 victory over FC Edmonton. But, in truth, the game should have been a blowout by the halftime whistle. Had the Railhawks even converted on a quarter of the chances they’d created, they would have made this a no-contest.

Instead, the RailHawks needed a diving 80th-minute save from keeper Akira Fitzgerald, who denied Eddies’ striker Michael Cox after the ball fell to him in the box after a Neil Hlavaty free kick.

The Eddies didn’t get to Cary, N.C. till 3 a.m. Saturday after a series of delays.

How bad was the trip? On Friday, the Eddies’ plane from Edmonton to Toronto was delayed by a couple of hours. When they finally got to Pearson International Airport, they managed to get onto a flight destined for Raleigh, N.C. They sat on the tarmac for an hour before being told there was something wrong with the aircraft, and they’d need to switch planes. The bags had to be transferred, a new plane was readied. Finally, at 3 a.m. the next day, the Eddies got to the hotel.

It was a marathon; a deluge forced the game to be delayed by two hours. If not for the fact that Carolina boasts the best surface in the league, it would have been a quagmire out there.

“I have to tell you, the groundskeeper here is phenomenal,” said Miller. “During the rain, I looked out at the standing water on the field and didn’t think you could play on this surface this week, let alone tonight. And, within 20 minutes, it’s in good shape. They do a phenomenal job here. The surface is first class.”

And, seven minutes into the game, the lights went out at WakeMed Park, leading to another 20-minute delay.

What the officials in Cary didn’t know at the time was that they only needed half of the lights to come back, because they’d only need to illuminate the Edmonton half of the field. Almost the entire first 45 minutes was played on Edmonton’s side, with Carolina wingers Enzo Martinez and Cesar Elizondo leading the attack.

And, with forward Daryl Fordyce left at home because of a knock he picked up in training, and newly acquired striker Anthony Adur’s paperwork not being completed in time, the Eddies were short on attacking options, preferring to leave Michael Cox up top as the lone striker.

Elizondo could have put the RailHawks up early, but a last-ditch block by FCE defender Mallan Robers kept the score 0-0. In the 21st minute, Martinez took the ball after a heavy touch from Eddies’ left back Lance Laing, strolled into the box and sprayed a shot just wide of the far post.

Then, Carolina striker Brian Ackley blazed a point-blank strike from inside the box just over the bar.

All the Eddies could manage was a series of message tackles, trying to keep the RailHawks off balance with some methodical late challenges. David Proctor bowled over Breiner Ortiz. Chris Nurse smashed Elizondo to the wet grass. And left back Laing, struggling to keep up with Martinez on the wing, came in hard and late.

But, the forwards who dominated the first half would each have a say in the deciding goal. Right after the half hour mark, Ackley cut in from the left wing to take a cross-field pass from Martinez on the right. He one touched the ball to Brian Shriver, who found space between FCE defenders Albert Watson and Mallan Roberts. He tapped the ball past keeper Lance Parker to give the RailHawks the lead.

Right before the stroke of halftime, Parker made an outstanding diving stop to keep out a header from former teammate Paul Hamilton, who met a corner kick and looked sure to double the RailHawks’ lead.

RailHawks coach Colin Clarke was livid over his team’s finishing, or lack of it.

“This game should have been over by now,” Clarke told the RailHawks ‘broadcast crew. “They’re still hanging around and anything can happen.”

Miller inserted Robert Garrett in at halftime, and the Northern Irish international brought some spark to the Eddies.

Garrett himself had a chance to equalize midway through the second half, but skied a shot over.

Still, the RailHawks wasted three golden chances to ice the game. Shriver, sent in past the defence thanks to a piercing ball from Martinez, shot wide when he had Parker at his mercy.

And Ty Shipalane, who came in as a sub, blasted wide from close range and then, later, decided to linger on a ball in the box, allowing Parker time to come out and take away the angle and make a save.

Still Miller said he was proud of the way the team responded in the second half, after such an awful first half and the preceding airplane hell.

“I thought we had a chance, that all the chances Carolina missed might bite them in the arse. But I think in the second half, we missed some very good chances as well.”