April 14, 2021
9 New Articles
Home Global Game Africa After OIympic loss to Japan, we will now see if mental preparations paid off for the Canadian women 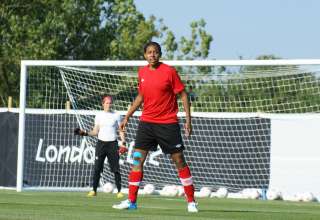 For months, Canadian women’s national-team coach John Herdman has worked to get the team psychologically ready for the pressure cooker that will be the Olympic tournament. Over the coming days, we will see how well Canada responds to Wednesday’s 2-1 loss to Japan in the group-stage opener of the Olympic tournament in Coventry.

You can’t escape some of the parallels to the 2011 World Cup opener, another 2-1 loss to a world-power team. At the Olympics, it was the World Cup champs from Japan; in 2011, it was the host Germans.

Of course, in 2011, Canada followed that narrow loss with a pair of stunning losses that saw us all question their mental toughness. Now, we will see how Canada’s new mental-toughness training under Dr. Ceri Evans will see Big Red through its next two group-stage games.

What comes next is a must-win game against South Africa — a team that Canada should be able to handle. And then comes a match against World Cup third-place finisher Sweden, a game that Herdman and the national team has long identified as one from which they could squeeze a positive result.

In the long view, a loss to Japan isn’t fatal or, ahem, unexpected. What will determine if Canada makes it to the quarter-finals or not is how it fares against South Africa and the Swedes. That was the plan before the Japan match; and it remains the plan now.

We will just need to see if Canada has the confidence — and a healthy backline — to come back from the opening-game loss. Maybe more crippling than the loss itself was seeing centre back Candace Chapman hobbling off the field in the 84th minute. She went down without contact, favouring a right leg that already had a knee brace on it. With a bad hamstring, Emily Zurrer wasn’t able to dress on Wednesday, leaving Canada very short in the back.

While Canada was able to hold its own for the first half-hour, disrupting the Japanese possession game and limiting the number of chances the World Cup winners could create, an erratic end to the first half gave reigning FIFA Player of the Year Homare Sawa and her teammates all of the goals they would need to wrap up the three points.

After a lovely series of passes that included a back-heel, Nahomi Kawasumi finished the chance, putting a perfect finish by Canadian keeper Erin McLeod. Kawasumi deserved the goal, as she was arguably the most dominant player of the game, making run after run down the left wing and causing plenty of issues for the Canadian defence. In fact, through most of the first half, the best one-on-one battles saw Kawasumi and Canadian right back Rhian Wilkinson go toe-to-toe.

McLeod, though, had to bear some of the responsibility for the back-breaking second goal, which came before the stroke of halftime. Aya Miyama headed the ball in after McLeod came off her line to get to the cross — and couldn’t get through her own defenders to get to the ball in time. It’s a bang-bang play, where a half-second hesitation can transform a goalkeeper from someone who looks like she is in command of the box to a goat.

Canada surged back in the second half, as Melissa Tancredi finished a cross from Wilkinson — the goal came just four minutes after left back Lauren Sesselmann cleared what would have been Japan’s third goal off the line.