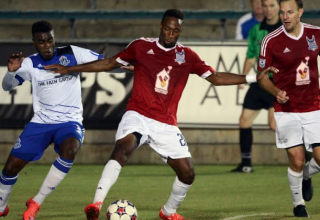 On a night when many Canadian sports fans were in ecstasy thanks to the heroics of Jose Bautista and/or Sebastian Giovinco, FC Edmonton’s supporters came to grips with the fact that the playoffs became a super long shot.

On Wednesday, the Eddies faced a Carolina RailHawks team that had been their whipping boys over the past two seasons. Emphasis on had. FCE captain Albert Watson was sent off midway through the second half, and the die was cast. The RailHawks won 2-1 thanks to a Nacho Novo goal scored late in the second half.

The Eddies are a point behind Tampa Bay for fourth spot in the NASL overall table — that spot represents the final playoff spot. But the Rowdies have three games left, the Eddies just two. And the Fort Lauderdale Strikers are tied with the Eddies, but have four games left.

Basically, the Eddies now need a ton of help. And it’s super-optimistic to think they’ll get it.

Of course, fate and the schedule maker also conspired against the Eddies. The NASL scheduled the Eddies for a midweek match on Carolina — and last Sunday’s road date against the Cosmo — during the international break. That meant the Eddies went into those games without their leading scorer and assist generator, Lance Laing, who was on duty for Jamaica. The Eddies were also without winger Sainey Nyassi (Gambia), midfielder Hanson Boakai (Canada U23) and starting centre back Mallan Roberts (hamstring injury).

Laing has now missed seven Eddies matches this season. FCE has earned just five of the potential 21 points in those games.

Roberts will undergo a fitness test in Edmonton to see if he can travel to Jacksonville and join the Eddies for their next game. Nyassi will meet the team in Jacksonville; but Laing won’t be there. He won’t be back in time from South Korea, where Jamaica played its recent friendly.

And Coach Colin Miller said he’s been very frustrated by the behaviour of the Jamaica Football Federation. He said the Eddies asked if the JFF to fly Laing directly to Jacksonville, and were refused.

The game started off very poorly for the Eddies; inside of 10 minutes, the home side had a one-goal lead. Off a throw-in, somehow RailHawk Nazmi Albadawi was left alone in the penalty area. He was able to collect the ball, turn and shoot with little trouble. The fact that a man in the box would be left wide, wide open off a throw in will be a piece of video that the Eddies players won’t want to be seeing over and over.

“It’s a ridiculous goal to give up from a defensive point of view,” Miller said. “We’ve been good on set pieces most of the year, but we give up this goal on a throw-in. In the last game, we give up a goal on a corner to Raul.”

But, the Eddies got the equalizer just before halftime. Midfielder Thiago de Freitas barged towards three Carolina defenders, and the first of the three, Daniel Scott, lunged in. The referee ruled that the foul occurred inside the box, and striker Daryl Fordyce stroked home the ensuing penalty kick. Whether de Freitas was inside or outside the box when the foul was committed was up for debate; what isn’t up for debate was the rash nature of Scott’s challenge. He had plenty of back-up — there was absolutely no need to lunge in.

Both Miller and Carolina coach Colin Clarke rolled the dice in the second half. Miller brought in striker Tomi Ameobi for de Freitas, who was injured on the Scott foul. Ameobi partnered Fordyce, and Clarke brought in Novo to add to the RailHawks attack.

In the 62nd minute, the game changed. Watson, already on a yellow for an earlier late challenge on Ty Shipalane, upended Shipalane again. It was just outside the penalty area, but the foul was severe enough to earn Watson his second yellow. With the Eddies’ depleted roster due to call-ups and injuries, Watson was the one player they could not afford to lose.

“I can’t argue the decision,” said Miller. “They were both bookable offences. No complaints.”

Finally, with less than 10 minutes to go, Novo got behind the makeshift back line and, even though he whiffed on the shot, he placed it well enough to nurse it over the goal line.

And while the majority of Canadian sports fans will be toasting their heroes, Eddies fans will be crying in their beer. It just hurts that much more when everyone around you is overjoyed.