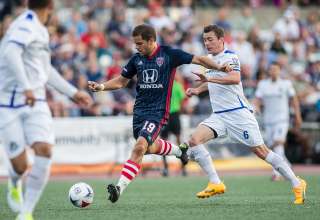 It was supposed to be a great year for Nik Ledgerwood. He became a new father, and was named captain of FC Edmonton before the 2017 NASL season.

But he spent most of the NASL spring season on the sidelines, appearing in just seven games. Two months into the season, his calf began to hurt, and the medical personnel couldn’t find the root cause. It was one of those nagging, week-to-week injuries that end up claiming a significant portion of an athlete’s season.

“It was frustrating because we really couldn’t put a finger on what the actual injury was,” Ledgerwood said after FCE’s Thursday training session at Clarke Field. “We knew it was a calf strain but it was hard to figure out an actual diagnostic for it and what the plan was to go forward. That was the most frustrating part about it — not knowing the timeline of when I could get back into the team.”

So, Ledgerwood would rest, the calf would feel better, and then he would go out onto the pitch. Then he’d feel the pain again and the process would start over.

But, through the first couple of games of the fall season, Ledgerwood has been able to play — and “knock on wood,” the calf injury is behind him.

The injury also cost him any chance of being named to Canada’s Gold Cup squad. Ledgerwood, a national-team veteran, knew that the injury really put him out of the running for the squad at an early stage, so he wasn’t sure if he was on coach Octavio Zambrano’s radar or not.

“I don’t know if I would have got selected,” said Ledgerwood. “That’s up to the Canadian coach. But there’s a game coming up in September [a friendly vs. Gold Cup finalist, Jamaica] that I’ll hopefully be a part of. But the main focus right now in August is winning games, getting points and moving up the NASL table.”

The Eddies are have a win and a loss to start the fall season — both against the Indy Eleven. But, since moving to a 4-1-3-2 formation, the Eddies have been creating more scoring chances and have scored four times over the two games. Look for more offensive pressure from the Eddies when the New York Cosmos visit Clarke Stadium Friday night.

“He [coach Colin Miller] wants to play a more attacking style of soccer in the second part of the season,” said Ledgerwood. “We still have to stick to our basics and the quality we have as a team when we defend. Everybody defends. We can’t get away from that.

“But you can’t jump the gun and say that because we scored three goals [in last weekend’s 3-1 win over Indy] you can’t jump the gun and say we’re an offensive team. We’ve had chances every game, to be fair, we could have scored three goals every game. But we lack the consistent quality for those goals. That’s more of a topic than us being more offensive.”

The Eddies, despite the recent surge, are still at the bottom of the NASL in terms of goals scored over the spring and fall seasons combined.