February 04, 2023
9 New Articles
Home Global Game CONCACAF After Friday’s results, Canada knows it must get at least a draw in Honduras 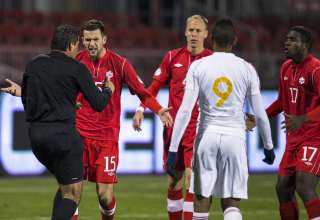 Goals — check. Three points — check. So why is Canada left with a bittersweet taste despite a 3-0 victory over Cuba and sitting tied with Panama atop Group C?

It will be the inordinate amount of missed opportunities against a Cuban team with no subs and out of its element on a cold autumn night that will have Canada ruing its chance to run up the score even more than it did. Canada now has 10 points and is two points up on Honduras after a 0-0 draw in Panama City. So did the team do enough to put itself in a good position heading into the final group match?

“I would have liked to score six, said national team coach Stephen Hart. “To be honest, we scored some goals and we won the game. Really and truly, I told the players, our objective is to win the game and what happens, happens. And we did that and we scored some goals. And I’ll take it.

“Players know they’re going away from home. We always knew that it would probably come down to the Honduras game. So we have some days to do a little practice session, a little bit of discussion on our approach and hopefully we get it right.”

“We know we have a tougher job ahead of us. It’s going to be very tough. If it comes down to goals I think we’ll be in a lot of trouble.”

With Honduras drawing Panama, the goal-difference question became moot. With eight points to Canada’s 10, Honduras would go ahead of Canada Tuesday in the Group C table no matter the margin of victory. Panama also has 10 points, but you have to assume it will get at least a point in its final group-stage match against Cuba.

Other players shared that disappointment but if they had been asked prior to the match if a 3-0 win would be a great outcome they would agree with Hart’s sentiments.

“For sure if we had found out that we’d win this game 3-0 we’d be so happy with it,” said midfielder Atiba Hutchinson who played with a lot of energy against Cuba. “But it’s a little bit different when you’re in the position and you get so many chances and don’t really hit the back of the net.

With Canada having so much trouble capitalizing on scoring chances it makes the loss of striker Olivier Occean all that more tough to swallow. Especially, since the red card he was issued in the second half came from such a minor altercation. The play, a shoving match after Will Johnson had scored, likely did not warrant a red card but the Canadian striker should have been smarter and kept his cool in that moment.

As a result, Canada will be without another key offensive player for its final group match.

After the match, Occean was at a loss for words.

“That’s a good question,” responded Occean when asked what happened. “I think in the moment we want to score more goals and want to get the ball back and I lightly pushed the goalkeeper, then red card. So that’s rough, that’s kind of rough. That’s poor refereeing, really poor refereeing.

McKenna, already distressed by the lack of finishing, knows it will be all that much tougher without Occean in the starting XI but knows the team has more to be worried about.

When Canada arrives in San Pedro Sula it will once again have to deal with a similar environment that it faced in Panama City but this time the Canadian Soccer Association has stated it has learned from that experience and will take appropriate precautions so those incidents aren’t a distraction again. But that will be tough as Hondurans fans will likely look to try to disrupt Canada’s rhythm as much as they can.

“We don’t want to think about what happened last time,” said Hutchinson. “We want to block everything out and just try to do everything we can to be ready for that game. We know it’s going to be a tough environment and the atmosphere will be great.”

Canada will also go from playing in 5 C temperatures to a hot climate very quickly. Tuesday’s match is scheduled to played with a 4 pm ET start where the heat could be a factor. So that could potentially play into the hands of the Hondurans. But when the Red and White march onto to the pitch at Estadio Olimpico, the game will be do or die. All the other factors will need to be thrown out the window. For some players this could be the last chance of making it to a World Cup. So the game will be the biggest of their career and for that reason there is a lot at stake in the next 90 minutes.