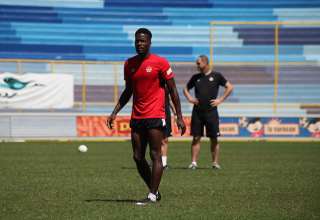 You wouldn’t blame Tosaint Ricketts if he asked for his next contract to be written and signed in blood.

The Canadian forward is listed as Unattached on the national-team roster. He had been with Turkish side Boluspor, but became a free agent because the club didn’t honour his contract. Read: It didn’t pay him.

But this is the second time a club has failed to pay Ricketts. Back in 2012, he had to fight for both Politehnica Timisoara and the Romanian Football Federation to become a free agent; Timisoara had failed to pay him and Ricketts had to take his plight to FIFA. (I wrote a feature on this for Avenue Edmonton, click HERE to see it).

“I ran into the same kind of problems,” said Ricketts after Canada’s training session Thursday at BC Place. “It’s been like this a little too often… the whole non-payment, FIFA termination, you know the spiel.”

Unlike the Timisoara situation, when Ricketts had to fight to become a free agent, he’s in the clear in 2016. The Boluspor saga is done. And he said Thursday that he’s looking to move to MLS.

“I’m looking to come back to North America. I’m kind of in between things, talking to a few clubs. Hopefully, after this camp, things will be sorted out.”

Ricketts said the clubs in play are MLS teams.

But, before he can move to a new club, he and his Canadian teammates have two huge World Cup qualifiers against Mexico to contest; the first goes Friday night in Vancouver. Canada Soccer confirmed Thursday evening that more than 54,000 tickets had been sold, and that the match against Mexico will surpass any of the Women’s World Cup matches staged in Vancouver in terms of attendance.

“It’s a dream, that’s all I can say,” said Ricketts of the expected crowd in Vancouver. “The program has come a long way. Some of the guys here have been through the ups, the downs, the hard times, times when we had little support. Now that we’re getting all the support, everybody is ready for it and I am confident in the players and I am so happy to be Canadian at this moment. To get a full house, it’s a dream come true.”

A full house cheering on the Canadian team, and a contract that’s actually, well honoured. Dare to dream.

FLORO’S REFORMS: One interesting tidbit from Canada’s post-training-session press conference: After being pressed by Mexican journalists about how the Canadian team was perceived by El Tri boss Juan Carlos Osorio, Floro said he would love to see coaches required to post their lineups 24 hours before match time, so media and fans would have time to analyze, comment and prepare. He’s clearly not a fan of the gamesmanship and the cloak-and-dagger mentalities that surround national-team games.

As well, when asked about the potential conditions for Friday’s game, Canada’s coach said it is much harder to prepare to play in the heat than it is to play in cooler temperatures. (The plan is for the roof to be open.) He also said that he prefers BC Place’s artificial turf field over grass.

(OK, that’s more than one tidbit.)