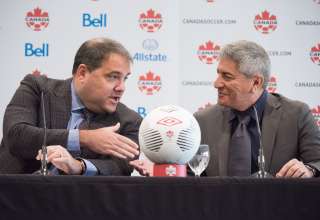 Welcome to Canada, Mr. Zambrano! Congrats on being named on the head coach of the men’s national team. Your résumé is certainly impressive; the second highest winning percentage of any coach in MLS history; a well-documented coaching and technical-director history in your native Ecuador; and, maybe, most importantly, a year with Tatabánya in the Hungarian league. (I guess you learned that sour cream goes well with everything — you’ll find that the paprika you’ll find in the average Canadian grocery store is pretty substandard.)

I hope you’re settling into life in Canada. Have you bought a pickup truck yet? Yes, it really is the preferred Canadian way of getting around.

Now, this is the part where I can tell you what you’ve gotten yourself into. Think of me as the guy at the water cooler on your first day who pulls you aside and tells you how things really work around here.

First off? Get used to traveling to Edmonton. Like, half of your national team plays for the Eddies right now. (OK, not quite half — but, trust me, it’s where you’re going to find a lot of your current crop of players). You’ll know you’ve settled into the job when you’re sitting at Clarke Field in May scouting an NASL game.

This is, well, because, and I don’t know how familiar you are with the idea that our so-called Canadian first division, Major League Soccer (where you used to coach)… well, it doesn’t give a lot of playing time to Canadians.  So far, only 11 Canadians have seen the field in MLS action this season. You may also find that some of the players who have long histories with the national side are with something we in Canada refer to as “Unattached FC.” Which, basically means, out of contract.

As well, you may find the guys you are picking from MLS are not seeing a lot of time with their clubs. You may be giving more minutes to your national-side players than their clubs will. This is, of course, natural, for Canadians.

We are talking quite a bit about starting our own national league. There is promise, but the longest-standing Canadian MLS club, Toronto FC, is pretty set against anyone competing against it for fans. Toronto FC didn’t start any Canadians last week, by the way. So, I guess they want to protect their right not to play domestic players.

So, you might find yourself combining the lower-division leagues, USL and NASL, for players. Then, lower divisions in Scandinavia. Look around for guys not getting paid in Eastern Europe.

You said today that Canadian players need to feel pride in their jersey: “Once you put it on, you need to feel something different.”

Well, if you want to expand on that, it should be “they should feel different because, well, they didn’t even know they were Canadian.” Players who are secretly Canadians will be your greatest asset. Your predecessor, Benito Floro, did a good job convincing players that they were Canadian. Scott Arfield comes to mind. Fraser Aird. Junior Hoilett. You have to keep that going. Scour rosters around the world and look for guys who might have any kind of affiliation to Canada. Did their parents honeymoon on the Canadian side of Niagara Falls? Can a player point to Fort McMurray on a map? He’s CANADIAN! Get on that.

Another quote from you: “The way the senior team plays football is going to have to be something that’s emulated by the younger players.” I see that you’ve been given the responsibility to remake all programming from the U-14 level to the senior men’s team. Basically, the program is yours. Now, the Canadian Soccer Association’s somewhat sudden decision two weeks to jettison Tony Fonseca as the director of the high-performance program makes sense. The decks were cleared for you to remake our program.

Heck, our program has been remade so many times over, it should be a reality show.

You’ve really got yourself into a pickle. Ask your predecessor, Benito Floro, about what he got himself into. Clubs not releasing players to the national team. Trying to steer a Canadian program towards the Hex, despite the fact that our program is so far behind so many others in CONCACAF when it comes to bringing national-team and youth-national-team players together to train, and to have technical ambitions that go from youth levels right to the senior teams.

I’m looking forward to meeting you. I can help you pick out just the right Calvin-peeing-on-a-Ford logo for the rear cab window of your Dodge Ram (or vice versa). And we can talk about saving Canadian soccer. And the Gold Cup. And how your vision will be realized, when so many have failed before.

Welcome to one of the most thankless soccer jobs in the world.

It starts on March 22, when you’ll watch Canada face Scotland. Then, you take the reins for the Qatar U-23 tournament, where Canada faces Uzbekistan and Qatar March 25, 28.