September 26, 2021
9 New Articles
Home Global Game Asia A Canadian coaching odyssey: Ongaro goes back and forth between Edmonton and China 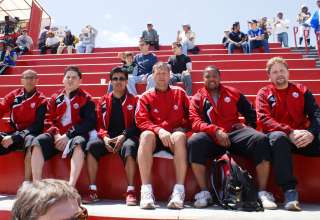 The office of the Archbishop O’Leary Soccer Academy is littered with pennants and souvenirs. There are flags of old NASL teams. There are pennants from various Canadian national teams and FIFA events. It’s like opening a giant passport — and seeing where one man has journeyed on his soccer travels, where he’s picked up stamps along the way.

This past week, he returned to Edmonton after helping leading his team to a silver medal at the third annual Asian Beach Games, held in Haiyan, China. Over the last year, Ongaro has been back and forth between China five times, staying in Asia for three-week stints as he prepares his team for upcoming World Cup of Beach Soccer qualifiers. He’s led his team in exhibition series against Oman and the United Arab Emirates.

Next up? A warm-up tournament against Portugal, Italy and Russia, who are more established beach-soccer powers.

“If you go by the stats, we shouldn’t win a game,” says Ongaro. “We should get hammered. But, for the players on the team, it will be a real learning experience. And they’ve earned this chance.”

To long-time Canadian soccer fans, Ongaro is very familiar. An Edmonton product, he played in the original incarnation of the NASL. He played and coached with the Edmonton Brickmen of the CSL. He was behind the bench for every season of the Edmonton Drillers’ existence in the National Professional Soccer League, the indoor league that gave us the three-point goal. And, he was the coach of the Edmonton Aviators of the USL, which went bankrupt just months into its inaugural USL season, then finished as league-owned Edmonton FC. In fact, the Aviators were so broke, that Ongaro ran the team’s practices in the field right next to his high school.

So, how did Ongaro latch on to the Chinese job? A year ago, he was coaching both the Canadian national futsal and beach soccer programs. Ongaro is also a FIFA instructor, and tours countries around the world. That brought him in contact with a lot of federations who have fledgling beach soccer programs. He got lots of coaching offers, but China was a bit more, ahem, persuasive in its pitch.

“China would not take no for an answer,” says Ongaro. “The commitment from the Chinese federation to the game is second to none.”

That means great facilities and a great environment for the players. But Ongaro is still getting used to the nuances of the language. A translator is provided for him whenever he is with the team. But he recalls a time when he was telling his charges about the need to stay calm — and he was addressing them in a soothing tone. But the translator barked as “if he was ripping them.” It took a while for Ongaro to understand that the intonations of Mandarin are different than English — and that while the translator sounded like he was angry, he really wasn’t coming off that way to the players.

So, how does beach soccer work? Each team is allowed to have one goalie and four outside players on the pitch at one time. A team is allowed to name 10 players in its lineup, of which two must be goalies. So, if you use the whole bench, there still is only room for one line change.

“The expert teams play a lot of flick-and-pass,” says Ongaro. “There’s a lot of one-v-one. A lot of man-to-man marking. But it is soccer. It is 100 per cent soccer. And you play on a sand pack that’s 40 centimetres (deep). So, because you are running in sand, you have to have the fitness to play. You’d like to be able to play with four players on, four off, but in the tournament, I had to use our best players, and a lot of the time I was using four plus two or maybe four plus three at best.”

In the final of the Asian Beach Games, China lost 2-0 to Iran — but Ongaro points out that Iran has been able to play three times as many competitive matches as the Chinese over the last cycle. That’s how far the game has to come. But, after a year that has seen him have one of the longest commutes to work of all time, will Ongaro finally move to China permanently?

“I’ve been offered the chance to move, though I have held off on it,” he says. “I love my job here and I love my work at the academy. But there is lots of pressure, and I can’t say that things won’t change. If we qualify for the World Cup, then there will be more pressure on me to move, even though I am confident I can keep doing the job the way I am doing it now.

Of course, Ross isn’t the only Ongaro in the news. His nephew, Jordan, is a highly touted NCAA player. He’s at San Diego State University, and there’s hopes that he could one day be an MLS SuperDraft pick. Jordan was named to the Canadian national futsal squad, which faced El Salvador Thursday in the first leg of a qualifier ahead of the CONCACAF Championships. Canada lost, 4-1, with the second leg going on Friday in Guatemala.