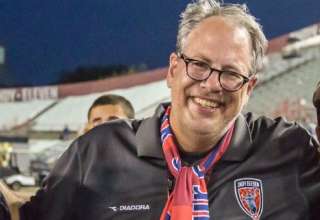 Peter Wilt admits he’s an unbridled optimist. And there’s no doubt many who will read the coming paragraphs with a “bah” and a “humbug.”

But Wilt, whose Club 9 Sports entity is looking to bring several expansion teams into the North American Soccer League and is working to find new investors for an existing franchise, is bullish about the prospects of the league, just weeks after so many were sounding the NASL’s death knell.

“Call me a cockeyed optimist, but I think that by the fall of 2018, we could have a 20-team NASL,” he said Tuesday. That bullish projection is based on the groups he’s currently consulting – and what he’s seen in terms of interest from potential investors across the continent. Consider that we could be looking at a six- or a seven-team NASL — if the league survives — for the spring of 2017.

Wilt, the first general manager of Major League Soccer’s Chicago Fire and the first president of the NASL’s Indy Eleven, is also working to bring a Windy City franchise to NASL. He has a large, vested interest in helping the league not only survive its current crisis, but create a foundation for growth.

Wilt can’t say much about the current process; he said all NASL owners have agreed to not make public comments about their work to keep the league alive.This is what we do know; the United States Soccer Federation has delayed its ruling on divisional sanctions till early 2017. We were expecting some word Tuesday, but that may have been an overly ambitious reach. Now, the word is that we might hear more by the end of the week.

The NASL’s New York Cosmos exist on paper, but released all of its players. The Fort Lauderdale Strikers need a new owner and were missing paycheques through the 2016 campaign. Rayo OKC had a tumultuous year which saw dwindling crowds, ownership squabbles and front-office clearouts.

So, in December, the Twitterverse was predicting the end of the NASL.

But, Wilt says the NASL owners have been confident that the league can be saved.

“Within the league, people are optimistic. People are working towards the same end, they want to go forward for 2017.”

That optimism is best reflected in FC Edmonton’s Tom Fath, who co-owns the team with his brother, Dave.  In December, Fath repeatedly said that he expected that his team would play in NASL in 2017. The club is hiring new staff, selling season tickets at a better pace than any previous season and has given coach Colin Miller a three-year extension.

Wilt said Fath’s public confidence mirrors what he has seen amongst the current group of NASL owners.

“Tom, as an original NASL owner, he is a major proponent for the league,” said WIlt. “His temperament has been even-keeled. His common sense, his stick-to-it-ness, these are all the qualities we are seeing and, to be honest, what we are seeing from most of the people involved.”

If NASL can survive, the question is how the league will be sanctioned. But this is very much an American issue, not a Canadian one. The stance of Victor Montagliani, the president of both the Canadian Soccer Association and CONCACAF, is that the divisional distinctions don’t matter very much. In Canada, FC Edmonton, Ottawa Fury and the three Canadian MLS teams all compete against each other for the Voyageurs Cup, the official national championship that determines our CONCACAF Champions League participant.

Without promotion and relegation, the divisional distinctions mean very little, if anything. We know that Major League Soccer is the league that has the highest visibility and the most money out of the North American circuits. Then, there is NASL and USL. Even Wilt admits that outside of the optics, there is a point to the “divisional distinctions don’t really matter” argument.

We still wait on pins and needles on a decision about NASL’s future. But, if the league survives, Wilt said he is happy with his role as a consultant and as a franchise builder. So, that puts a bit of cold water on rumours he might be working for the league in some capacity.