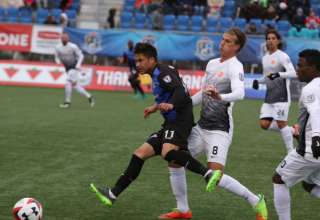 Dustin Corea in action vs. PRFC

The temperature was ice cold in Edmonton on Saturday night. There were snowflakes in the air. But Puerto Rico coach Adrian Whitbread’s temper was white-hot.

Whitbread wasn’t pleased after his team dropped a 2-1 decision to FC Edmonton,  the Eddies first win of the NASL season.

Whitbread was furious that the Eddies’ opening goal was allowed to stand. In the second half, substitute Ben Fisk stepped in off the left wing, beat Puerto Rico’s Yuma, then slipped a ball into Dustin Corea, who turned and delivered a swerving shot that went into the top corner of the goal.

But Whitbread and the PRFC players felt that the ball took a deflection off FCE striker Tomi Ameobi, who was in an offside position. It wasn’t clear from replays if the ball deflected Ameobi or not, but it came awfully close to him – that’s for sure. Ameobi, in fact, ducked to try and get out of the way of the shot.

The goal was credited to Corea, so the official scorer didn’t feel that Ameobi got a touch

But Whitbread said after the game that he was incensed that the goal was allowed to stand.

The Eddies doubled their lead when Dean Shiels’s free kick curled into the net. Shiels took the free kick from the wing, but PRFC keeper Trevor Spangenberg had to keep his eye on the charging Ameobi. It’s an awful position for the keeper; the incoming ball is curling towards your far post, but you have to assume that the striker bearing down on you is going to make contact.

Once Ameobi missed on his diving attempt to make contact with the ball, Spangenberg didn’t have the time to leap to his left to stop the ball from bounding in.

Jordi Quintilla got an injury-time consolation for the visitors.

“I didn’t think we deserved to give up a goal,” said Eddies coach Colin Miller. “We dominated them for long periods of the game.”

But, how would it all have been different had PRFC striker Hector Ramos not missed what should have  been an easy open-net goal? Early in the second half, with the score still at 0-0, Eddies goalie Chris Konopka committed a critical error, basically passing the ball right to Puerto Rico’s ace striker. Ramos had nothing but an open net to hit, but rolled the ball off the post. It was an awful giveaway, followed by an even more awful miss.

Ramos, who may have been surprised by the gift that he received, tried to hit the ball first time and slipped as he shot. In fact, he had so much time, he would have been able to stop the ball and walk it in towards the open goal.

Whitbread admitted the miss was critical. Knowing that the Eddies had lost three in a row, he thought getting the first goal would have changed the game.

“It maybe would have knocked them back a bit,” he said.

The Eddies, coming off a three-game losing streak to start the season, went back to basics, going with a 4-4-2 with Shiels and Ameobi up top. Canadian Allan Zebie started in the defensive midfield role, and had a strong game, winning ball after ball against a Puerto Rico team filled with physically imposing players.