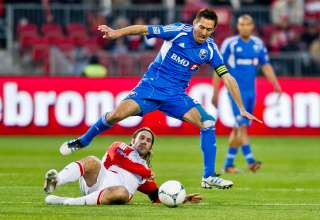 No matter how the teams may sit in the MLS league table, Toronto FC simply has the Montreal Impact’s number in the Amway Canadian Championship.

TFC scored its first victory of any sort at BMO Field this season, beating the Impact by a 2-0 score to send the Reds into the Voyageurs Cup final and handing Montreal another disappointing result in the national tournament.

With the Impact entering the game on a 288-minute shutout streak and an impressive 2-0 result in Kansas City on Saturday, the expansion side had to be considered the favourites, even on the road.  The Reds are on a record eight-game losing streak to begin the MLS season (a streak that included a loss at Montreal on April 8) and, after a 0-0 scoreline in the opening leg of the tie, the Impact could have advanced with a win or even a draw, provided it could score just one goal.

Instead, it was TFC who found the back of the net, with Reggie Lambe stunning the Impact with a goal in just the second minute.  Ryan Johnson added an insurance marker in the 38th minute and, despite playing with 10 men for most of the game and facing a lot of pressure from the Impact throughout the second half, Toronto kept the clean sheet.

“When everybody’s fighting like they did tonight it’s not hard to win,” said TFC goalkeeper Milos Kocic.  “The way we played today was how we’re supposed to play the whole season.  I hope we’ve finally found a way to win games….We’re just about the best Cup team in North America the last couple of years but we have to find a way to win the league games as well.”

The victory puts the Reds in position to win their fourth consecutive Canadian Championship. Toronto is unbeaten (7-0-3) in its last 10 Voyageurs Cup games, a streak that began with the famous “Miracle In Montreal” 6-1 win over the Impact in 2009.

Speaking of streaks, the Impact’s woes against TFC in Canadian Championship play continued, as Montreal dropped to 0-6-2 all-time against the Reds in the tournament.  The Impact haven’t even scored a goal against Toronto over their last four ACC meetings.

“The word of the two-legged series is efficiency,” said Montreal’s Patrice Bernier.  “If you count both games, we had more chances and direct chances to score but we didn’t.  It was 2-0 for them at the end of the day.

“This is a one-off game in a tournament.  It has nothing to do with the league.  They came out on fire in the first few minutes and got a lead…the team that wanted the most won it today.”

“I saw 11 guys that weren’t ready for a real game,” Marsch said.  “If you show up to play like that…especially in a Cup match and an elimination game, you’re going to get your ass whupped.  That’s what happened to us tonight.  We were second on every single play.

“We were never able to get ourselves going and give them credit, they pushed the game.  They didn’t sit back, they came after us and made it hard, repeatedly.”

It almost seemed as if the two teams switched their usual roles on Wednesday.  Whereas the Reds have been victimized by early defensive breakdowns on a few occasions, they were the ones who scored early.  TFC then played such solid defence in the second half that you would’ve thought it was the team with the long shutout streak, not the one with the most goals allowed in Major League Soccer.

The Impact, meanwhile, experienced some TFC-esque offensive futility, failing to break down the Reds’ back line despite piling on the pressure for most of the second half.  Montreal even had an extra man to work with after Richard Eckersley was sent off in the 16th minute.  Eckersley was tangled up with Sinisa Ubiparipovic on a tackle and, while the play looked innocuous, Eckersley was shown a straight red and ejected from the match. It seemed like Eckersley’s red card would be “that bad thing” that Kocic said always arises to hurt TFC throughout this losing streak, but Toronto instead turned in their finest defensive outing of the season.

“We were determined and we wanted to win the game, period,” Kocic said.  “It didn’t matter if we were three guys less than them, you could just see it in our eyes.”

Given the 0-8 start and TFC’s three-year Voyageurs Cup streak on the line, the whispers about Aron Winter’s future as head coach could have become roars had the team lost on Wednesday.  Instead, Winter (who has insisted that he isn’t worried about his job security) was simply satisfied that his players finally played up to their potential.

“I think the direction and the focus has been very clear the whole season,” Winter said.  “What I said to the players after the game was a big compliment.  If we can bring this effort every game together and battle for each square metre then we won’t have problems.”

The win also quiets some criticism about Toronto’s very conservative game plan in the opening leg of the tie, a 0-0 draw last week in Montreal.

“You don’t want to lose [the first leg] since it was also an away game,” Winter said.  “At that moment we played a bit different, organized, taking care that you don’t give up goals since we knew we had a second game at home where you could put on more pressure.”

Winter has consistently said that his team was simply unlucky to lose so many games in a row, and said that the Reds “had a little bit of luck” on Wednesday that was missing during their league games.

Indeed, Lambe’s goal seemed to bounce off the leg of Impact defender Tyson Wahl and redirect into the left side of the net. On the second goal, a corner attempt nearly bounced out but captain Torsten Frings (who played the full 90 minutes despite leaving Saturday’s match with a shoulder injury) cleared the ball off the line at the last instant and crossed in front.  The ball bounced to Adrian Cann, whose shot was deflected to Ryan Johnson in front, and he fired it past both goalkeeper Donovan Ricketts and a defender.

It was a well-deserved score for Johnson, who has just one MLS goal this season from 22 shots, several of those being near-misses.  Johnson was openly emotional after last Saturday’s loss to D.C. United and, even after he scored on Wednesday, looked more relieved than celebratory. Johnson said that a meeting earlier in the week between Toronto’s players and coaches helped re-focus the club in the wake of their poor results.

“We had a number of meetings after the last loss, the coaches pulled us aside and asked us a lot of questions about what was bothering us as players,” Johnson said.  “We got a lot of stuff off our chests from those meetings and there was some good dialogue between the coaches and players….The coaches really made sure that everybody knew what they were supposed to be doing today, I think that showed a lot in the match that were were on the same page and when we pressured, we pressured together.”

Johnson also gave an unqualified endorsement of Winter, a topic that he sidestepped following the United loss.

“[Winter] wants to win really badly,” Johnson said.  “He’s a coach that has our backs and we have his.  He’s a good person.  It’s tough to see him struggle, the players struggle for all these weeks and it just feels really good right now to get that win.”

One wonders if a similar re-focusing meeting might take place in Montreal.  While the Impact have played well thus far in their debut season in MLS, the club was looking at the Voyageurs Cup as perhaps their biggest goal for 2012.  Marsch dismissed any possible bright sides (such as a less-congested schedule) that might come from the Impact’s elimination.

“I look at it as a big disappointment,” Marsch said.  “Playing those games in CONCACAF are good for teams, they make teams better.  I know it’s harder because you have more games but that experience makes teams better and players better.”

As big as the victory in Kansas City was, Marsch said that it may have set the Impact up for a letdown performance.

“As we’re becoming a team and pushing this thing along you can’t ever become complacent,” Marsch said.  “You can talk about things but until you’ve experienced things as a group, talk is cheap.”

The Reds now move on to the two-legged Canadian Championship final.  The first leg on the road on May 16, with the return leg on May 23 at BMO Field. Winter said striker Danny Koevermans is probable to return from injury for that game and, overall, hopes that his team has weathered the storm of its bad start.

“We have to keep moving forward the same way; working hard and preparing for the next game,” Winter said.  “I think, and hope, that this should be the turnaround.”