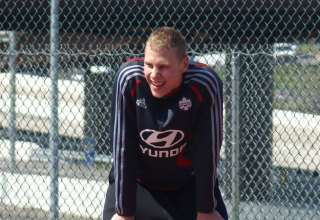 Toronto FC was unable to capitalize on 55-minute man advantage and dropped a 1-0 decision to the Chicago Fire Saturday evening at Charleston, S.C.‘s Blackbaud Stadium in the opening game of the 2011 Carolina Challenge Cup.

A sixth-minute strike from Chicago’s Marco Pappa proved to be the difference, which resulted from a TFC defensive breakdown. Gaston Puerari initially sent a long ball across the face of the goal to Davis Paul, who one-touched back to an open Pappa for the tap-in from four yards out.

TFC received a bit of good fortune in the 35th minute when the Fire’s Logan Pause was sent off for a bad challenge on academy product Oscar Cordon. And while Chicago netminder Sean Johnson was not forced to make a save prior to halftime, the Reds became increasingly attack-minded.

Toronto’s best scoring opportunity of the first half came off the foot of Jacob Peterson, whose powerful straight-on shot from 25 yards skipped just wide of the goal.

Initially unsuccessful trying to penetrate Chicago’s five-man midfield, TFC coach Aron Winter switched to a three-man backline to open the second half. And while Toronto FC increased its possession, Chicago was able to sustain the pressure and effectively kill off the game.

The Reds did create a number of scoring opportunities. New trialist Andrew Ornoch put a header over the bar in the 65th minute, Maicon Santos sent a 25-yard free kick high in the 72nd, and Cordon redirected the Brazilian native’s sliding pass just wide of the net three minutes later in TFC’s best chances of the half.

Cordon and Santos emerged as TFC’s most significant scoring threats in a lineup that blended a mix of veterans, trialists and academy players. Several regulars were missing, including Dwayne De Rosario, who picked up a minor injury in Friday’s training session and did not dress, and reigning team MVP Adrian Cann, who chose to return to Toronto as a result of stalled contract negotiations.

Winter, who remained positive despite TFC’s lack of scoring prowess, was pleased with his academy players.

“For some of them, it was the first time they played 90 minutes,” Winter said. “They did well.”

Reds goalkeeper Stefan Frei expressed some concern about his squad’s defensive lapses in the first half but noted a significant improvement after the break.

“I thought [in the] second half we did a very good job defensively. Not just defending…[Chicago] only had one chance in the second half, but also just building out of the back and moving and making sure they didn’t counter.”

After a midweek arrival in South Carolina, TFC defeated the College of Charleston, 1-0, Thursday evening on the strength of a Joao Plata penalty kick in a training match that consisted of three 30-minute periods.

The trialist was not a factor in 45 minutes of action against the Fire.

Toronto will play its second of three games in the Lowcountry on Wednesday at 7:15 p.m. against the host Charleston Battery of USL PRO.